What a Character — FLORENCE BATES

Who could forget her, asked Joe.  A puzzled Frank replied, who dat?

So you may be forgiven if you’ve never heard of Florence Bates. Perhaps, being the superb character actress she was, would have preferred it that way.

Ok, put your thinking caps on.  You may have enjoyed her performance as Edythe Van Hopper in Alfred Hitchcock’s Oscar winning 1940 Rebecca.  Or, as the grinning woman with the long tresses in 1942’s The Moon and Sixpence.  Or, as one Madame Dilyovska, a drunken dance teacher, in Stanley Donen’s wonderful musical, On The Town, with Gene Kelly and Frank Sinatra.

Bates’ best performances were in roles of socialites, henpecking wives, gossipy landladies and, of course, mothers-in-law. She even played a tart-tongued murderess in 1947’s The Brasher Doubloon, a 20th Century Fox film noir starring George Montgomery as detective Philip Marlowe.

She was good in comedies and lighter material — 1943’s Heaven Can Wait and 1951’s Lullaby of Broadway. Some considered Bates the female version of frequent costar, “Cuddles” S.Z. Sakall (Rick’s club manager in Casablanca).

Like many character actors, Bates did not start out to be a performer. She was born Florence Rabe in San Antonio in 1888, studied mathematics at the Univ. of Texas, switched to law and a four-year local practise while still in her Twenties.

She went through two marriages, the second to an a Texas oilman who went broke. A move to California followed with Bates eventually connecting ‘with the Pasadena Playhouse. The ensemble’s production of Jane Austen’s Emma provided a professional springboard and a new name — she played Miss Bates, a character described as shabbily genteel and a compulsive talker. Her turn was so well received that Florence Rabe decided to become Florence Bates.

And then Alfred Hitchcock came calling….(that’s Florence in character below in Rebecca).

Bates died of heart failure in 1954. She outlived a sister, a daughter and her husband. She was some character. 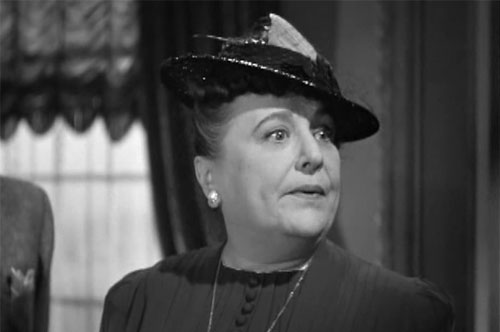