The Biggest Cowboy Star? A Quiz

Gene Autry was the only cowboy star to ever make the list of top ten box office draws.

Yes, many stars made westerns, but some stars made ONLY westerns, and usually B pictures at that. So making big box office returns was unusual. Not in Autry’s case.

Orvon Grover Autry was the first “singing cowboy” — well, at least the first successful one. He paved the way.

Born in Texas his family moved to Oklahoma when he was an infant.  In the late Twenties, he landed a spot as a vocalist on a radio station.

World spread about this local favorite and by 1934 Autry was making movies billed as “The World’s Greatest Cowboy Singer.” His first big screen outing in that capacity was with another vocalizing cowpoke, Ken Maynard, in 1934’s Old Sante Fe. 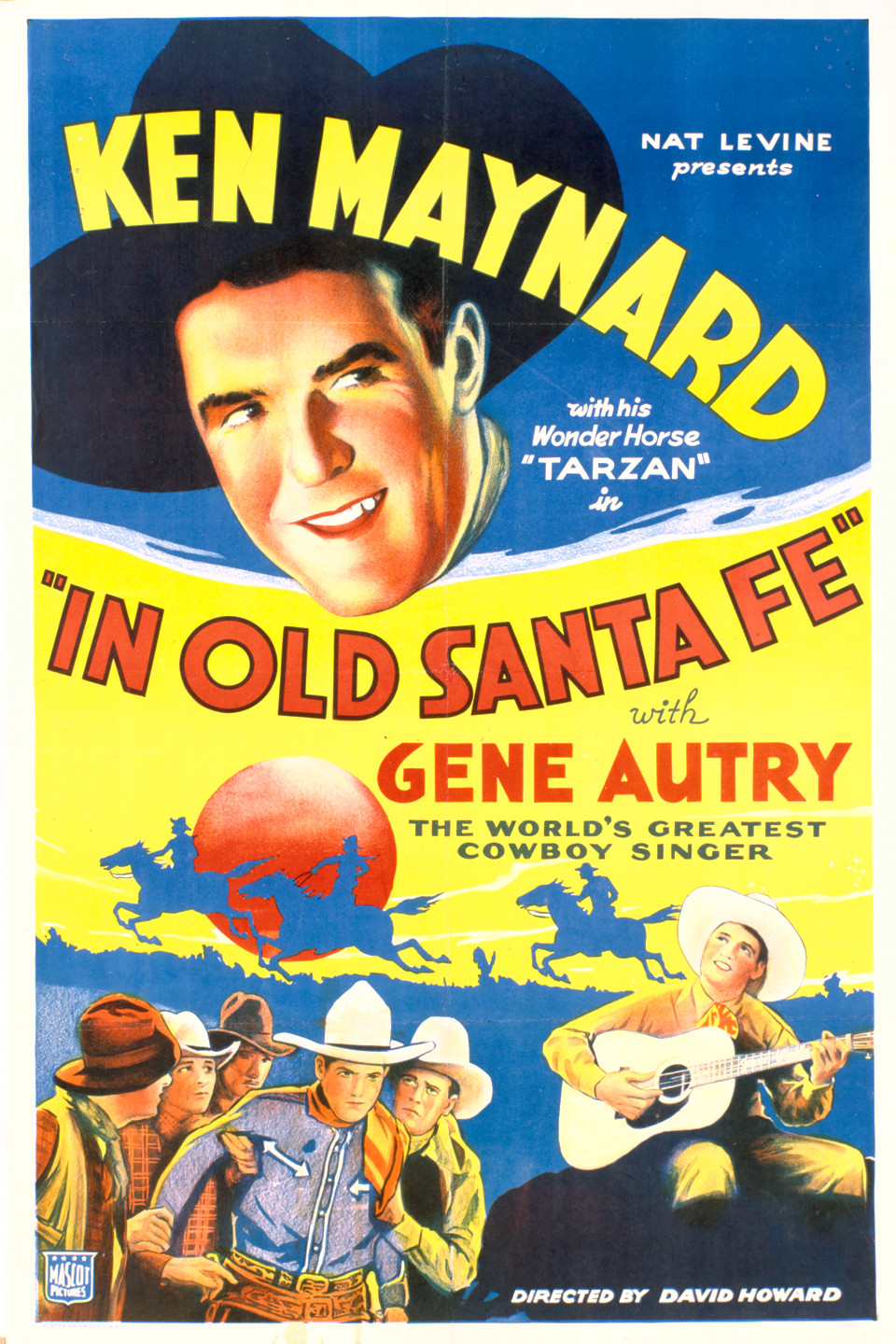 Interestingly, Autry and that other prominent singing cowpoke, Roy Rogers (see below), were close contemporaries — Gene born in 1907 and Roy four years later.  Also, Rogers’ movie career began a year after Autry’s.  And like Gene, Roy made his debut as a singer — a member of the Sons of the Pioneers vocal group.  And, finally, both Autry and Roger died in the same year, 1998; Gene was 91, Roy was 86.

Autry’s early movie making bounced from no-name Mascot Pictures to Republic Pictures, and then as the singing cowboy phenomenon peaked in popularity, to major studio Columbia.  Autry’s acting skills were hardly Shakespearean but he projected a righteous but genial, screen personality that made him a likable good guy.

After wartime service in the Forties, Autry emerged bigger than ever. (His movie career covers some 100 credits.) But as the singing cowboy phenomenon flagged in movies by the Fifties, he focussed his attention more on television.

The Gene Autry Show debuted in 1947, continued through 1954, and was produced by Austry’s own production outfit, Flying A Productions.  Accompanying Gene was amiable sidekick Pat Buttram.  The series had tremendous appeal for children.  A syndicated tv version of Gene Autry’s Melody Ranch followed a decade or so later.

Gene hung up his movie and tv spurs in the Sixties, and proceeded to became known as one of the richest businessmen ever to come out of show business.

Ok, on to our Gene Autry Quiz. Questions today and answers tomorrow. Here we go:

1) Question: What would a movie cowboy star be without his favorite horse? Which of the following was Autry’s? a) Tony; b) Topper; c) Scout; or d) Champion.

2) Question: After his retirement from movies and tv, Autry became an extraordinarily wealthy businessman with extensive holdings in real estate, broadcasting and in professional baseball.  Which team did he own?  a) The Dodgers, b) The Devil Rays; c) The Angels; or d) The Diamondbacks.

3) Question: Which of the following characters actors did NOT appear in various Autry movies? a) Frankie Darro; b) Francis X. Bushman; c) Alan Hale Jr.; or d) Sterling Holloway.

4) Question: Can you identify this Autry picture which was actually nominated for an Oscar? What was the title of the picture, and what was it nominated for? (Given that Autry appeared in dozens of pictures, this may be a hard one.  Hints: the picture came out in the early 1940’s and its title refers to a phenomenon extolled in a famous Judy Garland song.)

5) Question: Autry and Roy Rogers were immensely popular cowboy stars, but they didn’t particularly like or trust one another.  a) True; b) False.