One of the best character actors around.

Over  a career that lasted some 40 years and spanning about 150 screen and tv credits, Cecil Kellaway found himself usually turning up as a good hearted scamp with a twinkle in his delivery.

He won two best supporting actor nominations for roles as ‘Horace’ the leprechaun in 1948’s The Luck of the Irish.….

…and as the wise and kindly ‘Monsignor Ryan’ in 1967’s Guess Whose Coming To Dinner, the late Hepburn-Tracy outing with Sidney Poitier.

In Harvey, Kellaway was cast as kindly Dr. Chumley.

Kellaway was often thought of as an Irishman, but he was actually born in South Africa in 1893.  And prior to Hollywood, he worked for years as an actor, writer and director in Australia.  He commenced his Hollywood career in the early 1930’s cast mainly in gangster parts. Director William Wyler salvaged his career, casting Kellaway in 1939’s Wuthering Heights.

Probably the most perplexing casting decision involving Kellaway was MGM’s plopping him in the midst of that wonderfully steamy film noir, 1946’s The Postman Always Rings Twice. The actor’s cheerful cluelessness is a bit at odds with the motif of murder and lust expressed by illicit lovers, John Garfield and Lana Turner (whose expression below tells all.) 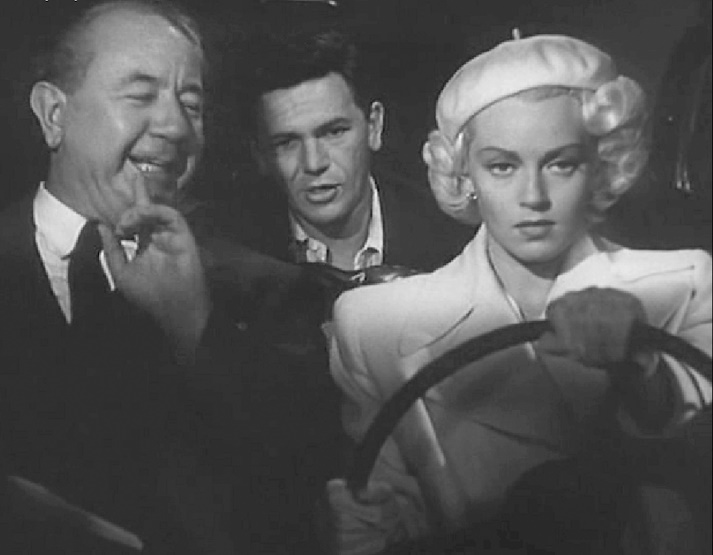 But we bet de Landa never played Santa Claus on television as Kellaway did in an episode of 1964’s Bewitched.