It was a prize winning play and translated to a tough, gritty film. 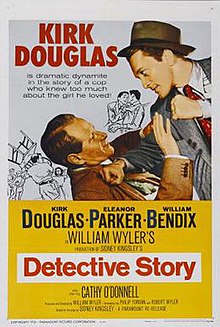 And who better to play the lead — a maniacal s.o.b presiding viciously over his local precinct house —  than Kirk Douglas.

We especially like Douglas in such roles as opposed to his loftier and more pretentious characterizations of, say, Spartacus or Vincent Van Gogh. Kirk is superb, for example, as the serpentine racketeer jerking Robert Mitchum’s chain in 1947’s Out of the Past.  Or, the duplicitous District Attorney in 1946’s The Strange Love of Martha Ivers.

No one, not even Robert Ryan, played a bastard as viciously as Kirk Douglas, writes film noir specialist Eddie Muller.

Detective Story was made and released by Paramount in 1951, and is a screen adaptation of Sidney Kingsley’s Broadway play.  At one point, none other than Dashiell Hammett was commissioned to write the screen adaptation, but he bowed out of the project — leading the film’s savants with speculation about what qualities the sadistic detective would have acquired at Hammett’s hands.

Oddly topical for today’s noisy times, Detective Story in director William Wyler’s sure hands shows what happens to a heartless Detective Jim McLeod, depicted as being driven to madness by the evil around him.  The film has been called a modern morality play set in a New York police station.

A solid supporting cast includes the always satisfying Eleanor Parker as the put-upon wife whose early-in-her-life abortion weighs significantly on the plot. And the ever-reliable William Bendix is on hand as the main character’s hard bitten aide.  The cast also includes such favorites as George Macready and Gladys George.

We won’t spoil the ending for you but let’s leave it that the tormented Detective McLeod takes a sudden early retirement.