There they are.  Is further identification necessary?

The movie is 1957’s Hellcats of the Navy, a World War II submarine drama from Columbia Pictures, and is the only movie that Nancy Davis ever made costarring her  more famous husband. The marriage, by the way, was five years old at the filming.

Our Nancy Davis Quiz is not focussed on Reagan but on Davis, whose 11 movie appearances seemed to get lost in the historical hubbub that surrounded her First Ladyship, which, she said, was really the “role I wanted to play.”

For our money, if you have to limit your exposure to a Davis film to one, make it MGM’s 1950 film noir, Shadow on the Wall, costarring Zachary Scott and child actress Gigi Perreau. Nancy portrays a psychiatrist with guts who protects a young girl who has traumatically witnessed a murder. (There’s Nancy with Gigi below.) 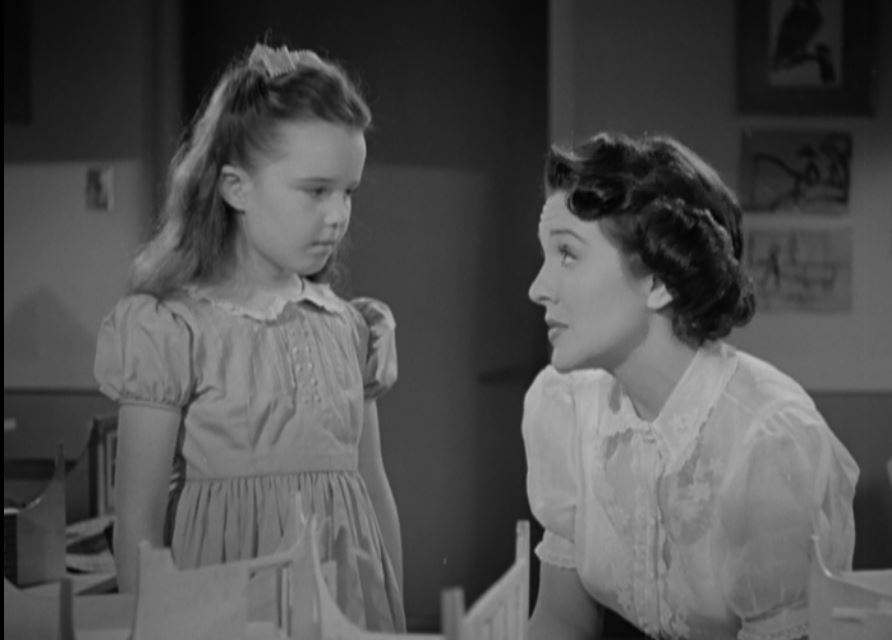 Davis portrayal is quietly authoritative and sympathetic.  Added advantage: she looks great. Ok, on to the answers to our Nancy Davis Quiz:

1) Question: Davis costarred with her husband of five years in which one of these films? 1) Night Into Morning; b) East Side, West Side; c) Hellcats of the Navy; or d) The Next Voice You Hear.

Answer: As mentioned above, the correct answer is (c) Hellcats of the Navy.

2) Question: Davis was considered a perfect choice to play the classy Karen Richards in 1950’s All About Eve. But she did not get the part.  Who did?  a) Ava Gardner; b)  Ann Sothern; c) Celeste Holm; or d) Arline Francis.

Answer:  (c)) Celeste Holm, who was nominated for a best supporting actress Oscar for her portrayal.

3) Question: In the 1950 MGM film noir Shadow On The Wall, Davis is cast in a part that seems tailor made for her. What part does she play? a) A sympathetic school teacher; b) A play-by-the-rules psychiatrist; c) A nun; or d) A high class madame.

Answer:  (b) A tough but understanding, not to mention good looking, psychiatrist.

4) Question: In her 11 feature films, Davis was usually cast as: a) The faithful Spouse; b) The responsible parent; c) The high class sexpot; or d) None of the above.

Answer:  We’ll be expansive about this and say both (a) and (b) apply.

5) Question: Nancy Davis was three months pregnant when she married Ronald Reagan on March 4, 1952.  a) True; or b) False?