Occasional an actress in middle age will burst on the screen and have a brief, spectacular career — think Mae West.

Melina Mercouri was 35 when she made the first of her some 20 films, and 40 before she hit it big as the good-hearted, life-affirming prostitute in 1960’s Never On Sunday.  Mercouri pretty much patented that stereotypical role, and in doing so became perhaps the only Greek actress to achieve real  international stardom.

Much of her success was due to her husband of 28 years, director/actor Jules Dassin. 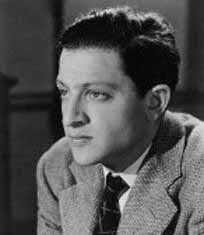 Best known for being the husband of Oscar-nominated actress Mercouri — yes, for her role in Never On Sunday — which he directed, Dassin was born of Russian-immigrant parents — “we were so poor, it was ridiculous.” — in Connecticut in 1911.

Despite long odds — including being blacklisted — he emerged as a strong studio director in several genres both in the U.S. and in Europe. Dassin is especially known for his classic caper outing, 1955’s Rififi. His handful of noir titles includes two we especially like: 1949’s Thieves Highway and 1950’s London-set Night and the City with Richard Widmark and Gene Tierney.

Dassin became Mercouri’s second husband in 1966, and the couple remained together until her death in New York City from lung cancer at age 73 in 1994. They teamed up on at  least eight pictures including 1957’s He Who Must Die and 1962’s Phaedra, which introduced costar Tony Perkins to European audiences.

Before meeting Dassin in 1955 Mercouri had carved out a pretty broad swath on the stage in Greece and in Paris, where she emigrated in the early Fifties. A first marriage to a wealthy Greek was on the wane but not yet over (the divorce came through in 1962).

In any case, the Dassin-Mercouri pairing became one of the most successful husband-wife teamings in film history. Her movie acting career often came second to Greek politics, in which Mercouri’s family was steeped. Her father was a member of the Greek parliament and her grandfather was once mayor of Athens.  For her part, the actress was elected to parliament in 1977, and served as Greek Minister of Culture from 1981 to 1990.

Her last film, 1978’s A Dream of Passion, costarring Ellen Burstyn, and was directed by —  Jules Dassin. It was made in Greece. As Mercouri would often say, “I Was Born Greek.”