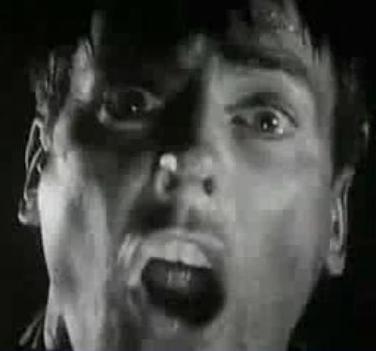 Above are two looks at Kevin McCarthy in perhaps his most enduring role — that of a benign physician battling an invasion of demonic pods which reduce human beings into emotionless and distinctly malevolent imposters.

The picture, of course, is Don Siegel’s 1956 sci-fi thriller, Invasion of the Body Snatchers. Critics have read all sorts of allegorical angles into the picture — eg. fear of Atomic invasion in the Fifties — but we prefer to regard the film as a straight ahead cliffhanger boasting a bravura performance by McCarthy as the last credible human on earth. (That’s our man on the run above with Dana Wynter, who plays his wife.)

The movie was remade in 1978 with Donald Sutherland in the McCarthy role.  Skip it, and enjoy the original.

Now on to the answers to our Kevin McCarthy Quiz:

Answer: Kevin’s older sister was novelist Mary McCarthy, remembered for her caustic tongue and her novel The Group. His cousin was Eugene McCarthy , the U.S. Senator and one-time presidential candidate.

Answer:  As noted above the answer is (d).

Answer: McCarthy was nominated for his role as Biff in the 1951 big-screen version of Arthur Miller’s Death of a Salesman.

Answer: Kevin found himself costarring with (d) Lana Turner in The Survivors, a glossy (sex, glamour, wealth) ABC series produced for the 1969-70 season. George Hamilton, Ralph Bellamy and Rosanno Brazzi were also in the cast. Episodes were shot in expensive locales and no expense was spared. Unfortunately, it didn’t work out. The Survivors was cancelled after 15 weeks.