How much did you know about June Allyson? 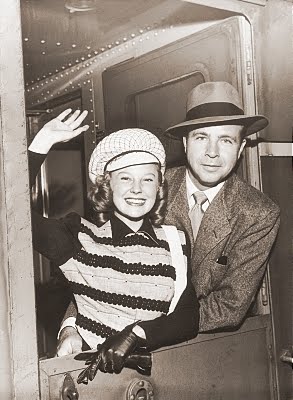 There they are, the bride and groom — in happier days.

June Allyson married the first of her three husbands — actor/director Dick Powell —  in 1945 when she was 28 (he was 41).  Both had redirected their careers from movie musicals to more dramatic fare (although Powell’s career transformation was more radical.)

The union had its ups and down, of course. There were affairs.  Allyson fell for Alan Ladd, her costar in 1955’s The McConnell Story. There was talk of divorce.

Allyson later confessed in her autobiography that she even had a brief fling with a young presidential aspirant by the name of John F. Kennedy. But Powell’s death of cancer in 1963 hit June hard, and for a time she struggled with alcoholism. (She died of various respiratory illnesses in 2006 at the age of 88.)

One thing is for sure:  that reassuringly sunny, smiling image June projected so successfully on screen wasn’t, let’s say, fully genuine. She was some actress.

Okay, on the answers to our June Allyson Quiz.

1) Question: Despite her goody two shoes screen image, Allyson was a salty, hard drinking dame who went through thee husbands.  a) True; b) False.

Answer:  As indicated above, the answer would have to be (a) True.

2) Question:  Allyson admitted to have had a brief affair with which one of these Presidential aspirants?  a) Richard Nixon; b) Ronald Reagan; c) George Murphy; or d) John F. Kennedy.

3) Question: June and Margaret O’Brien shared an unusual talent.  What was it?  a) Both could cry on cue; b) Both were facile magicians off camera; c) Both took up opera singing and were pretty good; ; or d) Both were sensational cooks.

Answer: a) Both June and Margaret O’Brien were celebrated for their respective abilities to cry on camera on cue. Allyson said her trick was “to try very, very hard not to cry. ” Strangely, the more she thought of not crying, the easier she cried.

4) Question: Which one of the following was Allyson’s most famous husband? a) Peter Lawford; b) Alfred Glenn Maxwell; c) Dick Powell; or d) Otto Preminger.

5) Question: Allyson dropped the Miss Goody Two Shoes image in two of her films.  Can you identify these two titles? (HINT:  One costarred Jose Ferrer and came out in 1955.  Allyson played a lesbian murderess in the other, which was released in 1972.

Answer: June played the frigid wife of Jose Ferrer in 1955’s The Shrike.

And, the lesbian murderess turn came in 1972’s They Only Kill Their Masters, a combination mystery and romantic comedy costarring James Garner and Katharine Ross.