It was nominated for Best Picture of 1947. (The winner that year was Gentleman’s Agreement.)

Robert Ryan and Gloria Grahame were nominated for their “best supporting” performances. (Winners were Edmund Gwenn for The Miracle on 34th Street and Celeste Holm for Gentleman’s Agreement.)

And director Edward Dmytryk also got a nomination but was bested by winner Elia Kazan, again for Agreement. For Crossfire it was a tough year, but at least it made it to the playoffs.

We will go out on a small limb and say that posterity has been kinder to Crossfire than it has to its preachier cousin, Gentleman’s Agreement.  Both pictures had their messages, still relevant, about the poison of anti-Semitism, but Crossfire was grittier, darker and much less glossy.

It tells the grim tale of the murder of a young Jewish man by one of four Army buddies (Robert Ryan, Steve Brodie, George Cooper and William Phipps) on leave. Robert Mitchum as a war weary Army sergeant assists pipe-smoking detective (Robert Young, long before his Father Knows Best incarnation) in trying to unravel the crime. 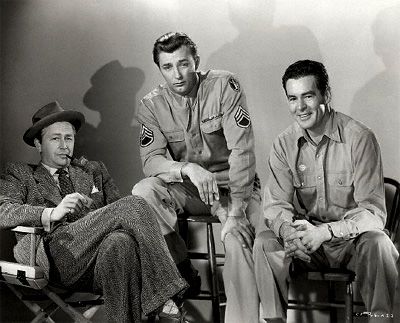 We hope we won’t give too much away by noting just how important Robert Ryan is to this picture. Ryan showed no fear as he shouldered the film’s rancid burden. His sneering ferocity got his career on track — and cast him in an evil mold he’d spend the rest of his professional life trying to break, writes film noir scholar Eddie Muller.

Crossfire.  See it or take another look.