May 2, 2019Written by Joe Morella and Frank Segers
1 Comment

We should be thankful that many wonderful performers were caught on film before they died. One Polish beauty, Lyda Roberti, had a very short life and career. But her out-there, campy style can still be enjoyed today thanks to the movies.

Just who is this person?

Well, she was a reasonably popular actress/singer onstage and on the big screen in the 1930s, as much an accidental comedienne (her heavily accented English pronunciations drew howls of laughter). She was sexy, playful and an audience pleaser.

The daughter of a circus performer, she found herself performing at an early age as a trapeze artist and singer. A veteran of vaudeville, she made a big splash on Broadway in the early Thirties once dubbed “Broadway’s preferred Polish blonde.” She also was a popular vocalist on radio.

She appeared tongue-in-cheek opposite W.C. Fields in 1932’s Million Dollar Legs as “the woman no man can resist.”

One theory, advanced by Roberti’s friend and occasional costar, Patsy Kelly, is that Roberti suffered a an undiagnosed heart condition stemming from the physical rigors of her early circus years. At the time of her death she was married an aviator, Bud Ernst, who she married in 1935 in Yuma, Arizona, then Hollywood’s quickie marriage capital.

In all, a remarkably engaging personality cut down in her prime. 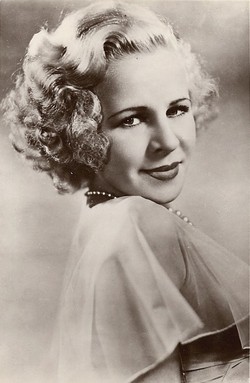