How much did you know about early Charles Bronson?

Let’s find out by getting to our Bronson Quiz answers. Here we go:

1) Answer: Bronson plays one of three San Quentin veterans caught up in a Los Angeles  gas station heist gone wrong in this solid noir titled Crime Wave. (An earlier scrapped title was the less evocative The City is Dark.)

2) Answer: The memorable House of Wax, a remakes of a 1933 Warner Bros. horror item, Mystery of the Wax Museum.  Bronson plays “Igor,” a character not working with a full deck. 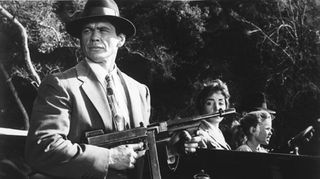 5) Answer:  Run of the Arrow. The star here is Steiger who passes as a Native American Sioux. Oh, dear.