He was a great director and a pretty good actor as well.

Frank doesn’t care what some critics say. He is an admirer of John Huston  (above right), and always will be. Any director who gives us The Maltese Falcon, The Treasure of Sierra Madre, Beat the Devil and The Asphalt Jungle (not to mention The African Queen, The Man Who Would Be King and many other titles) has got to be cherished.

As you can infer from the photo above — John to the right with his father, Walter Huston — our subject is Huston’s 1948 masterpiece, the Treasure of the Sierra Madre.  Men tend to love this picture and women, for reasons that elude us, seem as a whole to dislike it.

The picture has nonetheless garnered its share of awards:  best director and best screenplay awards for John Huston and a best supporting actor nod for Walter.

Treasure did NOT win best picture in 1949; Hamlet starring Laurence Olivier did (he garnered that year’s best actor citation). The Academy can be forgiven in this case but Frank still believes they (yet again) didn’t get it right.

To make thing even more formal, the National Film Preservation Board entered Treasure into the national film registry in 1990. In any case, don’t let all this official — and much deserved — recognition turn you off the movie. Treasure is at heart a sweaty, down and dirty adventure outing about three down-and-nearly-out men prospecting for gold in the 1920’s in the mountains near Tampico, Mexico.

There’s Humphrey Bogart as Dobbs, Huston pere as crusty Howard and the always underrated Tim Holt as Curtin.  (Bogie and Holt share the stock photo below.) 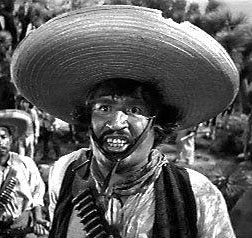