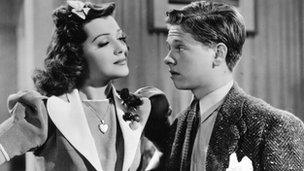 If you think Ann Rutherford’s movie career consisted solely of playing goody-two-shoes characters, think again. Yes, she was Andy Hardy’s main squeeze at MGM. But she was also a cabbie-turned-sleuth opposite Tom Conway in RKO’s 1945 noirish mystery, Two O’Clock Courage. Here she is below (left) getting the once over from Jane Greer, then billed […]

Girls came and went in all those Andy Hardy movies, but one girl remained constant — Polly Benedict, Andy’s true love. And throughout the late Thirties and early Forties it was pretty, perky Ann Rutherford portrayed Polly. Ann had quite a career in other films as well.  Who can forget her as the youngest of the […]

We think of Noir classics, we think of war films, and (early on) westerns. But seldom do we envision Robert Mitchum in comedies. He made several not usually mentioned in official summaries of the actor’s voluminous credentials — more than 130 movie and tv credits amassed over a nearly 55-year career. (Mitchum died in 1997 […]

She really didn’t make that many films compared to other stars of the era, but Jane Powell established herself as an enduring star. She is still with us at 92, and can look back on being in some top notch films. She took her stage name from the first character she played onscreen. And after […]

When he hit the American film scene in the early 1950s he epitomized the term — Latin Lover. He was already a star in his native country when Hollywood beckoned. After Mexican-born Ricardo Montalban made such a hit, MGM imported another Latin Lover for its roster. He was Fernando Lamas, the Argentine-born actor-athlete who was Esther Williams’ third husband to whom she […]

OK. How much did you know about the decades of Tarzan films? Did you know that at least two dozen actors have taken on the role of the fearless original raised in the African jungles since the first Tarzan movie was made in 1918? Or, that there have been about the same number of Tarzan […]

TARZAN and the Movies — Our Quiz

Yes, it started in the silent era. American filmgoers fascination with Tarzan. What is it about Edgar Rice Burroughs’ 1914 tale of a British nobleman — one Viscount Greystoke — raised from early boyhood by primates in the African jungle that movie audiences over generations have found so compelling? Is it the inherent near nudity? […]

Other Brave Attempts by Enterprise Studi...

Force of Evil and Caught, the final two films from Enterprise Studios, were worthy efforts. Indeed, the former is today considered something more than that. A dynamic crime and punishment drama, brilliantly and broadly realized, wrote Bosley Crowther of the New York Times when Force of Evil opened during the Christmas season of 1948. If […]

A LOOK AT TWO WESTERNS

As you have no doubt ascertained by now, this weeks blogs are devoted to the limited (just nine pictures in all) output from that feisty mid-Forties independent production outfit, Enterprise Studios, founded in large part by actor John Garfield. He starred in two of Enterprise’ best known titles (1947’s Body and Soul and 1948’s Force […]

Yesterday we briefly discussed Enterprise Studios biggest box office hit, Body and Soul. Today we’ll look at Arch of Triumph. What a cast! (There are the costars above.) How could it fail? As we wrote yesterday, Arch of Triumph qualifies as a prestige outing from Enterprise, the short-lived but fascinating independent production outfit formed in […]