Some time ago we ran the above photo of a young and very pretty Lana Turner, one of many informal shots extracted from our exclusive Collection of  late star photographer Donald Gordon.

In doing so, we re-relayed the longstanding classic movie tale, that Turner was discovered while sipping a soda in a Hollywood ice cream parlor. It’s a great story, mostly for being true. Lana’s transformation from high school teenager to glamorous leading lady is one for the ages.

Schoolmate, actress Nanette Fabray, recalled that she was the most incredibly beautiful girl we had ever seen. Even the teachers stared at her…she had the bearing of a princess. We all knew she would be a movie star.

Lana quickly became known as “The Sweater Girl” after she was discovered not at Schwab’s Drug Store but at Currie’s Ice Cream Parlor on the corner of Highland Ave. and Sunset Blvd.

She was cutting a high school typing class and sipping a coke with friends when she was introduced to man-about-Hollywood Billy Wilkerson.

Details of the encounter are contained in a 2018 biography of Wilkerson — Hollywood Godfather: The Life and Crimes of Billy Wilkerson (Chicago Review Press), written by his son, W.R. Wilkerson III.

The book is a warts and all look at this little-known (at least by the general public) shadowy figure, who harbored a personal vendetta against studio bosses along with a chuminess with organized crime figures.

Wilkerson was amazingly ambitious — he opened and ran many of Hollywood’s most renowned restaurants, cafes and clubs in the 1930s — and maintained an influential power base as the founder-publisher of The Hollywood Reporter, one of the film business’ two principal trade papers (the other is Daily Variety) that continues under different ownership to this day. (He is fodder for another, separate blog. Stay tuned.)

Back in January 1937, Wilkerson, then in his late Forties, took a break at Currie’s Ice Cream parlor, located at Sunset and Highland, a block away from The Reporter’s office. The soda shop was a popular hangout for the young women who attended Hollywood High School, located catty-corner across the street.

Wilkerson fancied himself a keen judge  of budding screen talent, and noticed that striking, young co-ed. “She was magic,” he later said.”She had a quality all her own that was unforgettable.”

Wilkerson asked the soda shop’s manager to arrange an introduction.  At first, Lana was apprehensive. “At first I thought it was someone from the principal’s office,” she later said.

She was reassured by the manager that Wilkerson was a “very important man.” He then walked over, presented his business card and popped the time-honored question: would you like to be in pictures?

Lana responded that she’d have to ask her mother.

She did, and days later the two wound up in Wilkerson’s office. He put her in touch with Zeppo Marx, who had retired from The Marx Brothers to become a talent agent and who asked that director Mervyn LeRoy arrange a screen test. Lana soon found herself working as an extra in the 1937 version of A Star Is Born and in her first speaking role in They Won’t Forget.

Her appearance as a high school co-ed threatened by the randy principal earned Lana the “sweater girl” designation. “There’s no question that the most remarkable thing about Lana’s career was her discovery. It became the most important thing in her life,” said seen-it-all Hollywood attorney (and close Wilkerson pal) Greg Bautzer.

In any case, Wilkerson and Lana became fast friends.  There he is (below left) at Lana’s fourth wedding, this time to Bob Topping. The wedding reception was held in Wilkerson’s Bel Air home. 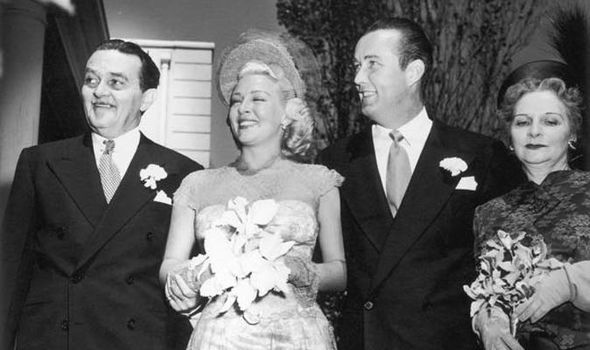