Since her death in 2011, friends have been asking when we were going to devote a blog entirely to Elizabeth Taylor.  While she wasn’t a favorite of Frank’s, Joe remembers her fondly for one of her earlier movies.

Of course she won two Academy Awards for Best Actress. One for Butterfield 8, which today seems a hopelessly dated film.  Almost everyone agrees that the award that year was really for her previous work in films such as Cat on a Hot Tin Roof and Suddenly Last Summer, when she’d been nominated and lost.

Her second Oscar, for Who’s Afraid of Virginia Wolfe, seemed more deserved. However Joe feels are best films were earlier ones.Father of the Bride and Father’s Little Dividend, where in effect she was a supporting actress to Spencer Tracy.

Joe thinks her best work was in the true classic film A Place in the Sun opposite her pal, Montgomery Clift.  The two had incredible chemistry on screen.

There’s a story told by George Stevens Jr. that when he and his famous father were driving home after the Oscar presentations where Stevens had won Best Director for the film, the young boy remarked on how the film was the best film he’d ever seen, and how his wise father said something to the effect: “let’s wait 20 years and see if you still think so.”

Well, the film has endured for nearly 70 years, and indeed is a classic.

We relate this story only because it we agree wholeheartedly with the general premise. Let’s wait 20 or 30 years before we declare a movie a classic. Only time will tell if a film becomes part of the history of the industry.

One thing is indisputable.  It was the film that catapulted Elizabeth Taylor to stardom.

But Joe’s favorite movie  in which Elizabeth Taylor appeared is not a true classic,  just a fun old film.  It’s  A Date With Judy, which stars Jane Powell in the title role and Taylor in one of her first grown up, semi sexy parts, opposite Robert Stack.

The billed star of the film was Wallace Beery, believe it or not.  Jane was 19 at the time, but playing a wide-eyed high school girl. Taylor was only 16, but already playing a sophisticated beauty.  And, of course, it was a musical with other players  such as Xavier Cugat and the unique Carmen Miranda. Imagine! Carmen Miranda and Elizabeth Taylor in the same movie?

A Date with Judy.  Catch it.  It’s 40’s Technicolor Escapist fair at its best.  And it was the first film Morella saw at New York’s famed Radio City Music Hall. So his reminisce of Elizabeth Taylor radiates from  that MGM  feature. 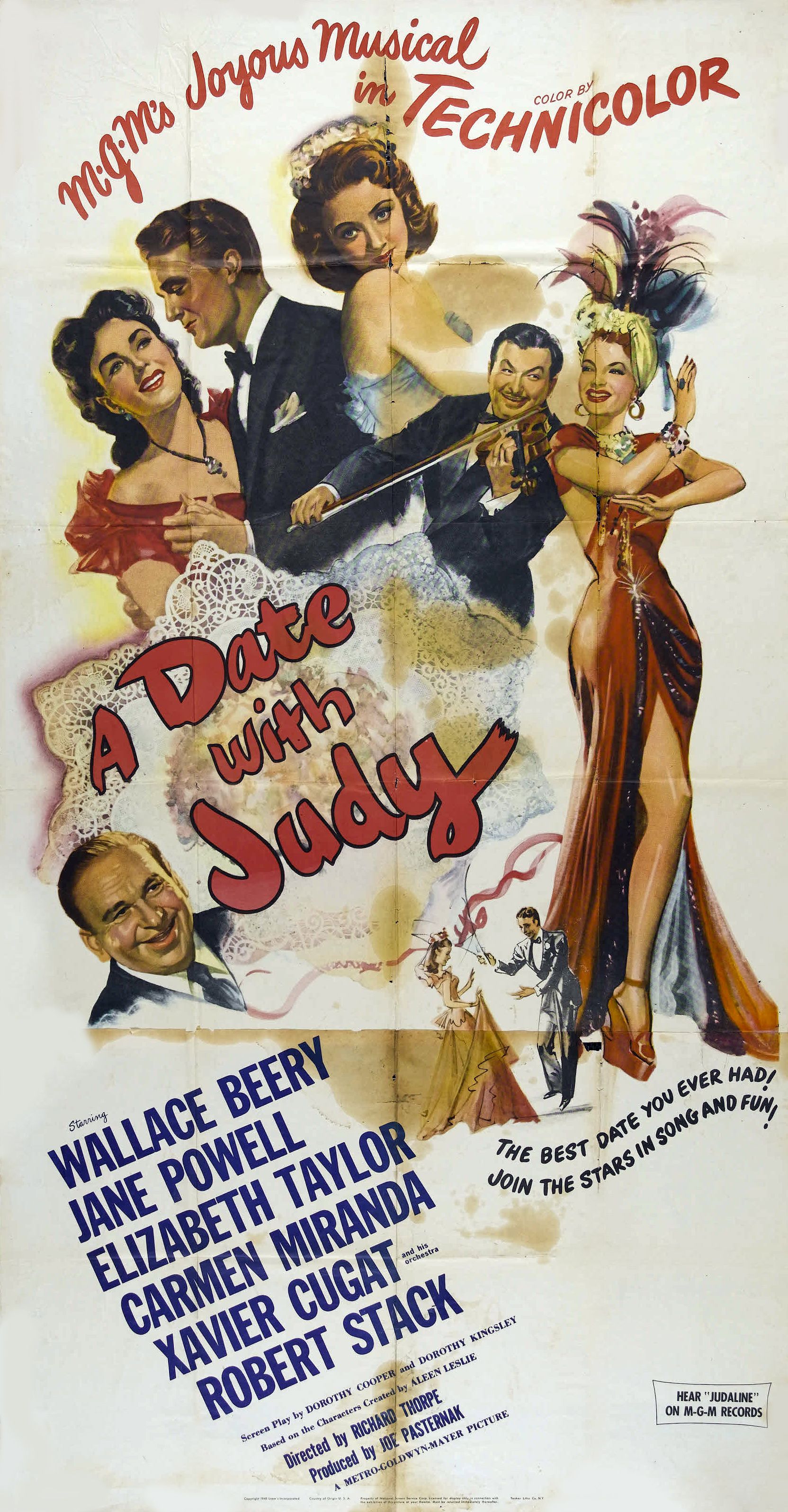