‘The Maltese Falcon’ — The Book And The Movie 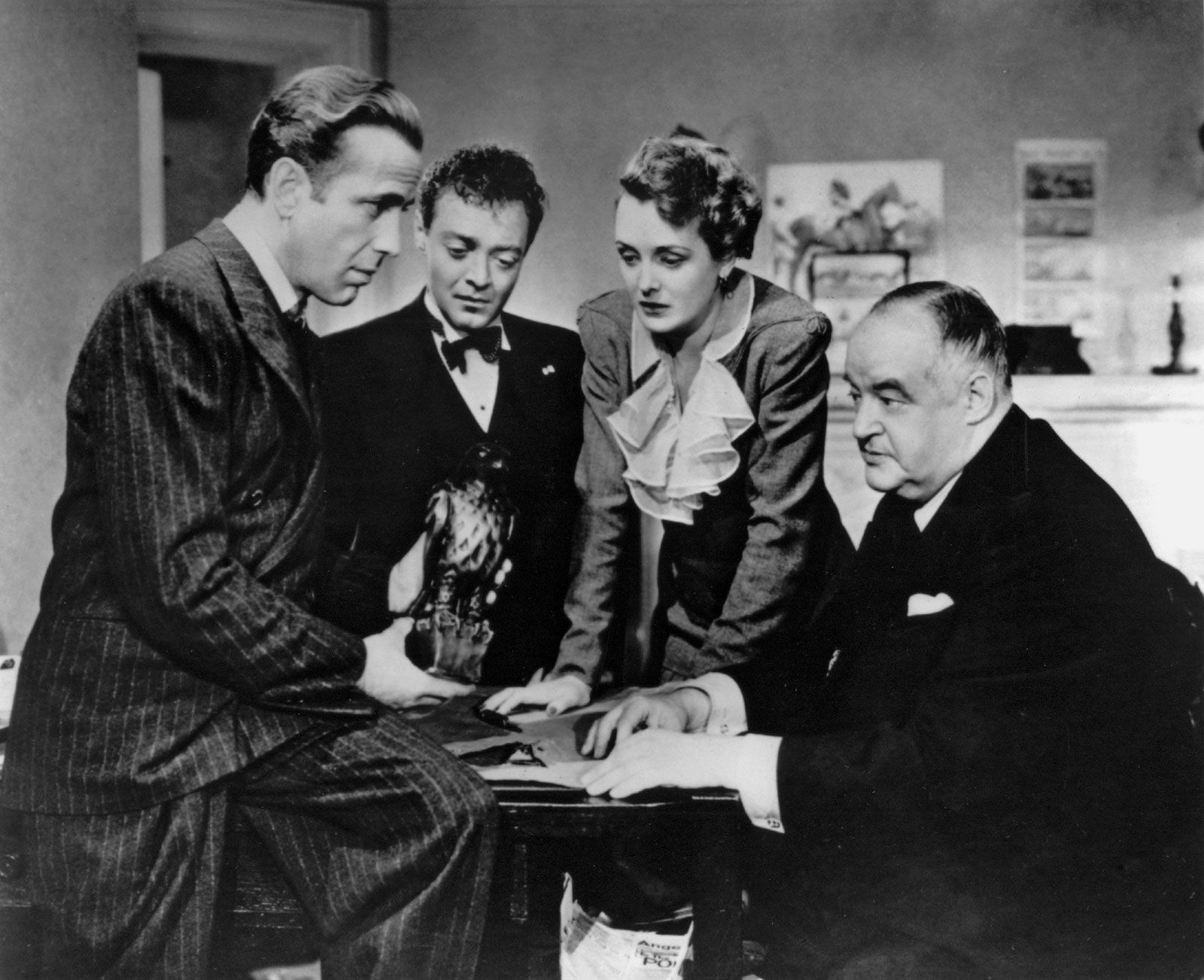 No, this is not designed to be yet another discussion about how different a film’s source material is from the film itself.  Or how much better the book is.

No, it’s just that we decided — just for laughs and our own edification — to see how the movie’s chief characters are described in the 1930 novel by Dashiell Hammett as opposed to how they appear in John Huston’s 1941 classic.

The lineup of key principals is pictured above — that’s Humphrey Bogart as detective Sam Spade on the far left, holding the big black bird coveted by (continuing from the left) Peter Lorre as Joel Silver, Mary Astor as Brigid O’Shaughnessy, and “the fat man,” Kasper Gutman played by Sydney Greenstreet.

In general, the movie closely follows the book.  It is not a heavily adapted screen version of say, one of Raymond Chandler’s denser and more complication novels.  Still there are interesting differences in how the principals are shown.  Here are some:

—  Hammett’s novel begins with a physical description of Sam Spade that differs somewhat from the image conjured by the word ‘Bogie.” His jaw was long and bony, his chin a jutting V under the more flexible V of his mouth….His yellow-grey eyes were horizontal….He looked rather pleasantly like a blond Satan. 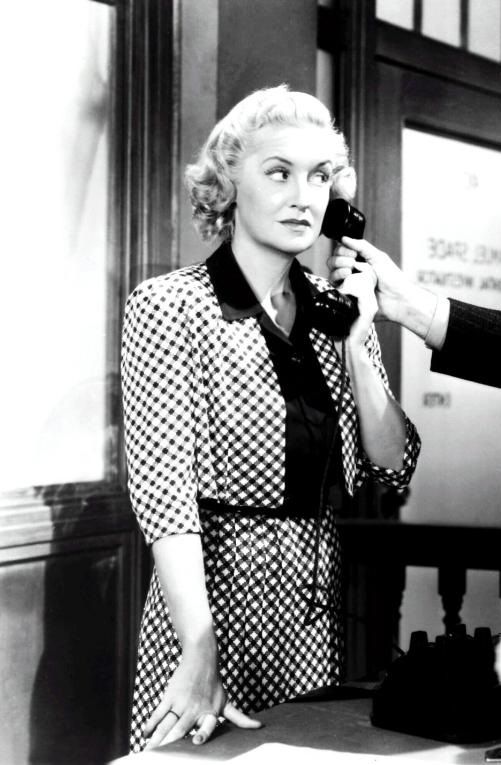 — Spade’s faithful and level-headed secretary, Effie Perrine, played by Lee Patrick (pictured above), is quite a bit different physically from the character in the book, described by Hammett as a lanky  sunburned girl whose tan dress of thin woolen stuff clung to her with an effect of dampness. Here eyes were brown and playful in a shiny boyish face. This, obviously does not describe Patrick who was in early middle age when she appeared in the movie.  She’s firstrate, so who cares?

— Effie Perrine describes Brigid O’Shaughnessy as “a knockout” both in the book and the movie. Here is Hammett’s description: She had cobalt blue eyes that were both shy and probing. She was tall and pliantly slender, without angularity anywhere. Her body was erect  and high-breasted, her legs long, her hands and feet narrow….The hair curling from under her blue hat was darkly red, her full lips more brightly red. White teeth glistened in the crescent of her timid smile. Not exactly a spitting image of Mary Astor but close.

— Joel Cairo is described in the book as a small-boned drak man of medium height. His hair was black and smooth and very glossy. His features were Levantine….He held a black derby hat in a chamois-gloved hand and came towards Spade with short, mincing bobbing steps. The fragrance of Chypre came with him.  Peter Lorre fit the bill almost precisely here.

— ‘The Fat Man’ is described as flabbily fat with bulbous pink cheeks and lips and chins and neck, with a great soft egg of a belly that was all his torso, and pendant cones for arms and legs. Sydney Greenstreet comes close to fulfilling this very image. By the time he showed up on director John Huston’s The Maltese Falcon set at Warner Bros. at the age of 61, he had logged 40 years as a stage actor on both sides of the pond. The 1941 classic was his first film. Wrote Huston, he was perfect from the word go, the Fat Man, inside out.  I had only to sit back and take delight in him and his performance.”