The Incomparable DEBORAH KERR — Our Quiz

She was equally at home playing the whore……

….and playing the nun. 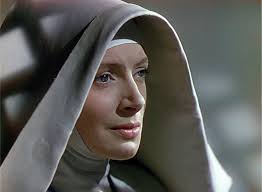 And, she had the distinction of being nominated for the best actress Oscar a total of six times, and never winning. (Her sole Oscar win was an honorary one, awarded in 1994 citing her “impeccable grace and beauty.”)

Yes, we are talking about Deborah Kerr, one of Great Britain’s most successful exports to Hollywood.

Our favorite Kerr movie is 1953’s From Here to Eternity, which ranks as one of the best Book-2-Movies evolutions Hollywood ever produced. Despite its staggering 650 pages, the book translates beautifully to the screen.

The essence of the James Jones novel was captured perfectly by director Fred Zinnemann, and the famous scene of Burt Lancaster and Kerr in passionate embrace on the beach (see the B&W photo above) has long since been established as a Hollywood pictorial icon. No question — she could turn on the sex appeal.

But what else do you know about this “English rose” who figured prominently in some of the most acclaimed films of the Fifties and early Sixties. As usual, questions today and answers tomorrow. Here we go:

1) Question:  Despite her arbitrary Hollywood designation as the “English Rose,” Kerr was actually born in a) Australia; b) Wales; c) Scotland; or d) Serbo-Croatia?

2) Question: Yes, Kerr was nominated in the best actress Oscar category for her work in six films including From Here To Eternity and 1956’s The King and I.  Which one of the following did NOT earn her a nomination?  a) The Sundowners; b) Edward, My Son; c) Separate Tables; or d) Quo Vadis.

3) Question: Not widely know was the fact that Kerr could sing pretty well, with her vocal abilities on display at least once since she did her own singing in the musical The King and I. a) True or b) False.

4) Question: In her early 30’s Kerr conducted an offscreen affair with which one of her onscreen costars?  a) Robert Mitchum; b) Yul Brynner; c) Robert Taylor; or d) Burt Lancaster.