How much did you know about today’s Quiz subject, who carved out quite a presence on tv as well as on the big screen.  We’re talking Rosemary De Camp here.

Yup, she specialized in playing mothers — older, still a bit sexy and often possessing a sometimes ruthless intelligence. She’s shown below in one of her more benign parts, as the mother of rebellious tomboy Doris Day in 1951’s On Moonlight Bay.  (That’s Leon Ames to the right as Doris’ dad.) 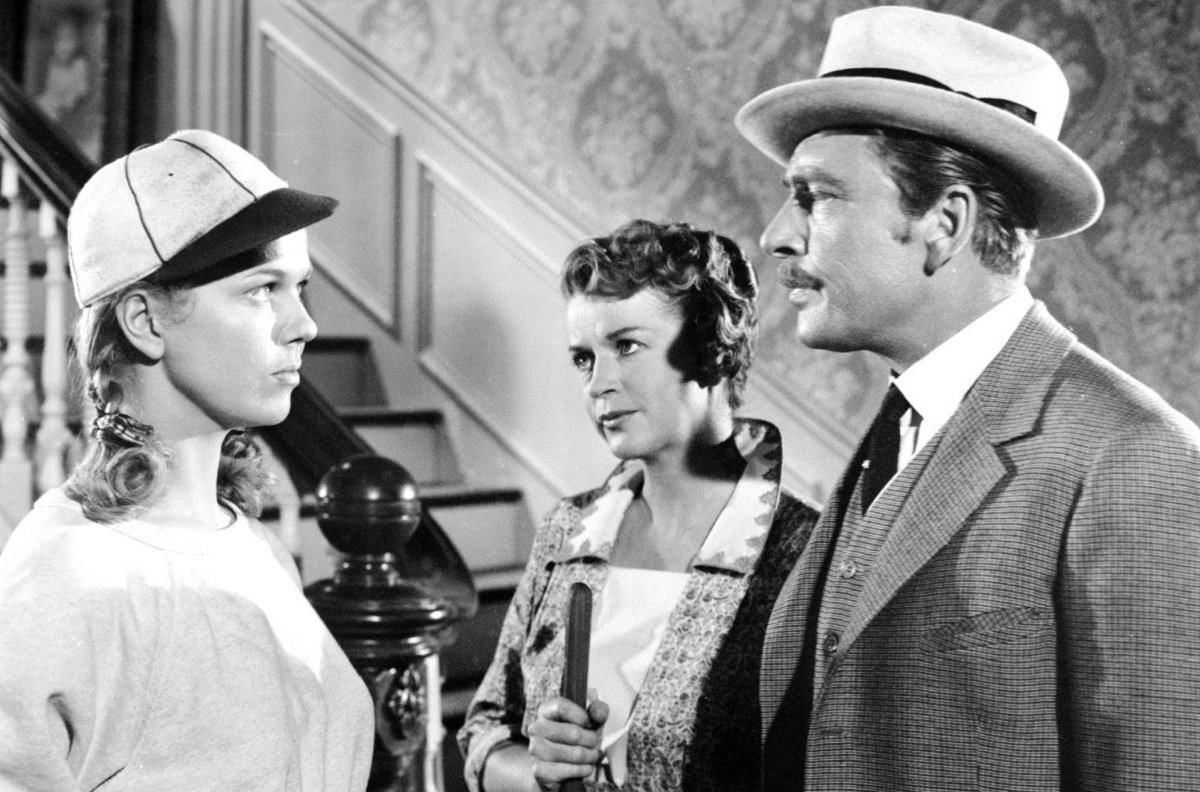 Interestingly, DeCamp was in reality just 11 years older than daughter Doris, who falls for unconventional college student Gordon McRae in this Warner Bros. romantic musical. Astonishingly, she was actually 11 years younger than “son” James Cagney in 1942’s Yankee Doodle Dandy. Obviously she was destined to play “moms” of an indeterminate age.

If you have to confine yourself to one DeCamp outing, make it 1947’s Nora Prentiss, a solid film noir with DeCamp as the emotionally frigid spouse of upright doctor (Kent Smith).

Ok, on the answers to our Rosemary DeCamp Quiz:

1) Question: Rosemary DeCamp  was indeed noted for playing the mothers of famous stars, who in reality were sometimes younger than she was. Which one of the following did NOT portray a DeCamp son or daughter? a) James Cagney; b) Marlo Thomas; c) Doris Day; or d) Dwayne Hickman.

Answer:  Sorry, another of our trick questions. All choices apply. As indicated above, DeCamp played the mothers of Doris Day and James Cagney.  Ditto for Marlo Thomas and Dwayne Hickman, in the 1966 tv sitcom That Girl and on 1954’s Love That Bob, respectively.

2) Question:  As a budding movie actress, DeCamp had a somewhat unusual connection to Howard Hughes.  Why? a) They were lovers; b) He produced some of her pictures and made her miserable; c) Hughes crashed an airplane he was piloting into the roof of her Beverly Hills home; or d) None of the above.

Answer:  (c) In July of 1946,  Hughes did indeed crash the experimental XF-11 he was piloting into DeCamp’s residential neighborhood at the time.  Part of the wreckage cut through the roof of her house. Hughes survived as did DeCamp, and he subsequently paid for all damages.

Answer:  (c) Jackie Gleason. The original tv’s The Life of Riley debuted in 1949 with Gleason as bumbling Chester Riley and Rosemary as his wife. In 1953, Bendix and Marjorie Reynolds as Peg Riley took over.

4) Question: DeCamp is probably best remembered for playing Robert Cummings’ aunt in The Bob Cummings Show on tv.  a) True; or b) False?

5) Question: DeCamp did a ton of television later in her career.  Which of the following programs did she NOT appear in? a) Rawhide; b) The Partridge Family; c) Death Valley Days or d) The Memoirs of a Fairy Godmother.

Answer:  Sorry, again. Rosemary appear in all of these show — and much more.