Each year 25 films are added to the Library of Congress’ National Film Registry. In the next few weeks we are going to highlight some of the movies which were listed last year.

The 1935 film, The Informer, was a labor of love for director John Ford, who was born Jack Feeney in 1894 in Maine to a sprawling Irish immigrant family. Based on a Liam O’Flaherty novel about the Irish “troubles” in the early 1920’s, Ford’s version is actually a remake of a British production filmed six years earlier starring Cyril McLaglen, the brother of Victor (above), who stars in this edition.

Critics loved the picture when it first came out, but the public did not despite its half dozen Academy Award nominations which included wins for Ford as best director and McLaglen as best actor. The Informer was initially tabbed as one of the best pictures ever made.

Interestingly, its reputation has dimmed with the passage of time. Today, Ford’s legacy is cemented largely by his superb 1956 western with John Wayne, The Searchers.

British critic David Thomson dismisses The Informer as “risible.” He adds: The rank emotionalism of the Victor McLaglen character in ‘The Informer’ is the obverse of the vaunted aggressiveness of the John Wayne character in…’The Searchers.’

McLaglen plays the title character, Gypo Nolan, a roistering, dim-witted sort who is an IRA rejectee and who collects a 20-pound reward by ratting out his best friend, a fugitive of the British “Black and Tans.” The latter, played by the masterful Wallace Ford, is killed. A number of plot twists and turns are resolved by another killing — that of Nolan himself at the hands of the IRA. 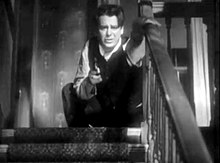 There Ford is (above) wielding a pistol in The Informer. By the way, did you know that Wallace (not John) was born in England in 1898? (He died in 1966 at the relatively early age of 66.) He was a marvelous and highly versatile actor.

Playing an IRA commander is Preston Foster, who died at 69 in 1970, and was one those virile-looking actors most often was seen onscreen in various authoritarian roles — cops, military types, priests, etc. He was never a huge star, but he certainly was a solid performer in movies and on tv, most often getting top or near-the-top billing. (There he is in the middle below surrounded by McLaglen on the left and Ford.)