She was really a big star on radio, but she made several films and is one of those celebrities known by two names…. Barbara Jo Allen, and the character she created, Vera Vague.

How did this happen?  Allen, born in 1906 to a moneyed family (she grew up on New York’s Fifth Ave. and studied at the Sorbonne in Paris) once found herself at a PTA meeting which featured a world literature lecture from a well-meaning but totally scatterbrained woman.

Eureka.  Allen’s Vera Vague, the prim, club-woman caricature — a talky, shrill-voiced and man-hungry spinster — was born. She parleyed Vera into countless radio visits, to a long-term professional relationship with Bob Hope, and introduced a delightfully wacky character to mainstream American audiences. (There she is at the radio mike below.) 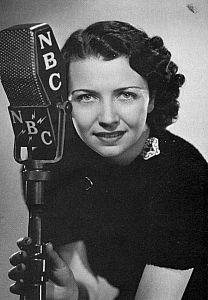 Apart from Vera, Allen logged a pretty extensive movie career, appearing in more than 50 pictures.  In all she is credited with a total of 71 movies and tv appearances over a 25-year career. She is, for example, billed under her own name in George Cukor’s 1939’s drama, The Women, starring Norma Shearer and Joan Crawford.

At Columbia Pictures, Allen made a number of well-regarded comedy short films as Vera, beginning in 1943. In addition to being real audience pleasers, a pair of the shorts were nominated for Academy Awards. Moviegoers may have forgotten Barbara Jo Allen but Vera Vague lives on.