In our tribute to those serviceable though second tier leading men we mustn’t forget Don DeFore.

He was an exemplar of a wholesome personal conduct rarely found in the licentious cauldron of classic Hollywood screen personalities.

DeFore was married — once — to the same woman for 51 years until his death in 1993. He was an Iowa native, a family man (siring five children), a practising Lutheran, public spirited (receiving a presidential appointment by his friend, Ronald  Reagan as Peace Corps advisor) and affectionately regarded by his peers.

DeFore was also an actor of considerable experience, first on the stage then movies and then, most successfully, on tv. In all his career spanned more than a half century, and offered its share of casting surprises.  For the most part DeFore was the good-natured buddy or befuddled sidekick, but not always.

Let’s see how much you recall about this amiable screen presence.  As usual, questions today and answers tomorrow. Here we go:

1) Question: DeFore didn’t often get to slap around his leading ladies but does so in 1949’s Too Late For Tears, a celebrated film noir in which he manhandles a very nasty Lizabeth Scott. a) True; or b) False. (P.S. That’s Scott holding Don at bay below.) 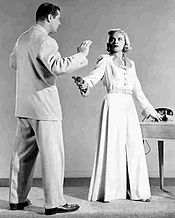 2) Question: Although he was passed over as “not star material” by at least two studios. DeFore was in the mid Forties was voted among the top five “stars of tomorrow” by national movie exhibitors.  a) True; or b) False.

3) Question: Which one of the following did DeFore NOT costar with on the big screen? a) Jerry Lewis; b) Spencer Tracy; c) Van Johnson; or d) Tyrone Power.

4) Question:  DeFore’s most prominent tv role was in a sitcom involving a former bandleader.  Can you name him and the name of the show?

5) Question: DeFore was highly active in official industry organizations related to film and tv.  Which of the following was he NOT involved in?  a) National Academy of Television Arts and Sciences; b) Actors Equity; c) American delegate to the Moscow Film Festival; or d) Screen Actors Guild.