‘OUT OF THE PAST’ — A Quiz on the Classic

Whenever anyone mentions film noir the movie most cited is 1947’s Out of the Past. But how much do you really know about this classic?

We shall soon find out.

As you probably know, the movie boasts two sublime performances — from Robert Mitchum and Jane Greer. Mitchum we know a lot about.  But not as much about Greer.

What film noir fan can forget her performance in Out of the Past. Film noir-author/critic Eddie Muller calls this movie spellbinding. It reconfigured genre cliches by investing them with depth and style.

Beautifully directed by Jacques Tourneur with a huge assist from cinematographer Nicholas Musuraca, the picture boasts of a first-rate cast including Kirk Douglas, Rhonda Fleming, Steve Brodie, a young Dickie Moore and, most especially, Greer.

Her physical beauty is cannily showcased against her atrocious behavior.

As the prototypical femme fatale on steroids, Jane Greer’s flashing, cunning eyes betray a depthless venality not apparent in her slightly plump, puckish face. She vamps her way into the ranks of cinematic Circes, second to none, wrote Muller. (Greer was tight with a pair of (film noir’s) favorite daughters, Gloria Graham and Audrey Totter — imagine the slumber parties!) 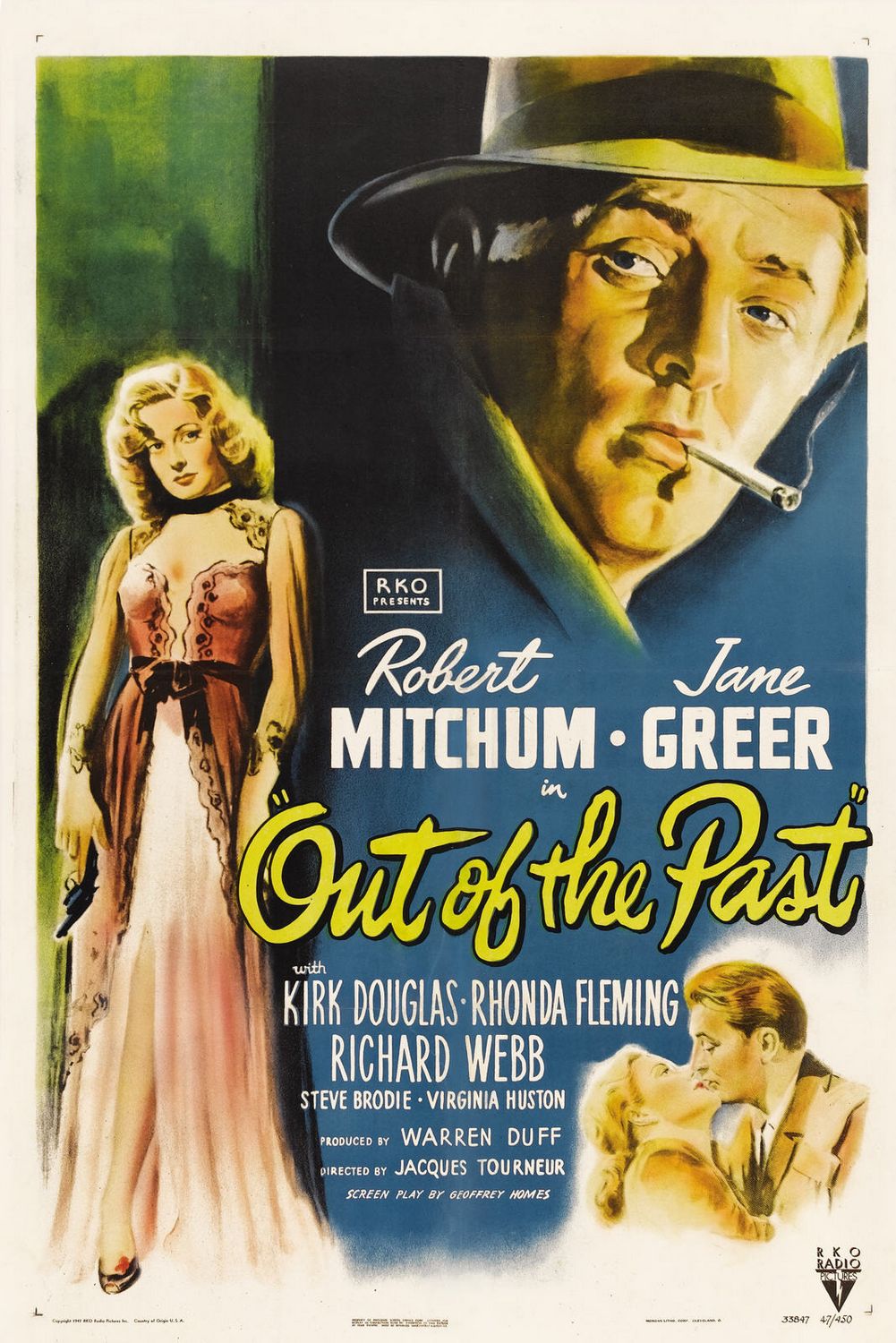 Ok, on to our quiz.  As usual questions today and answers tomorrow. Here we go:

1) Question: Out of the Past marked a milestone for Mitchum, and came at a high point in his career.  a) True; or b) False.

2) Question: Mitchum was not the first actor to be offered the lead role of ‘Jeff Bailey.’ Which of the following received initial offers?  a) Humphrey Bogart; b) John Garfield; c) Dick Powell; or d) Robert Montgomery.

3) Question: Out of the Past marked a career milestone for Jane Greer, and came at a high point in her career? a) True; or b) False.

4) Question:  Like many enduring movie classics, Out of the Past was a boxoffice bomb when it was first released.  a) True; or b) False.

5) Question: Dickie Moore, who plays the young deaf mute known as ‘the Kid,’ was offscreen married to one of Hollywood’s biggest musical stars.  Who is she? a) Ann Miller; b) Kathryn Grayson; c) Betty Hutton; or d) Jane Powell.

6) Question: Which one of the following titles was Out of the Past originally known by?  a) Against All Odds; b) Build My Gallows High; c) Elevator to the Gallows; or d) I Left My Heart in San Francisco.

7) Question: Jane Greer appeared in a 1984 remake of Out of the Past.  What role does she play?

8) Question: Director Jacques Tourneur was a Frenchman wise in the ways of Hollywood. His favorite producer at RKO was a) Howard Hughes; b) Val Lewton; c) Warren Duff; or d) Edward Dmytryk.

9) Question: RKO realized it had a big hit with Out of the Past, and released the picture soon after shooting concluded on Jan. 9, 1947. a) True; and b) False.

10) Question: What is the most common criticism of Out of the Past? a) The movie runs too long; b) It is confusingly plotted especially in the San Francisco scenes; c) The characters lack any sense of humor; or d) All of the above.