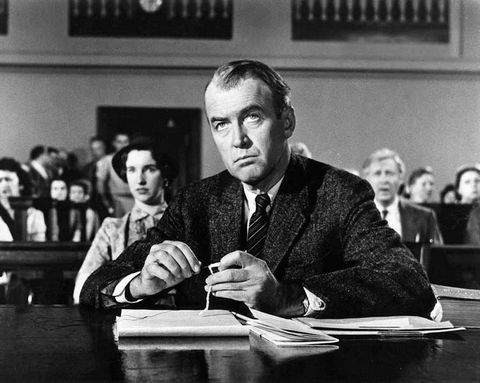 There’s our man James Stewart as seen in director Otto Preminger’s superb 1959 courtroom drama Anatomy of a Murder. It’s a movie we like a lot, and a recent screening proved once again just how good an actor Stewart was.

We also like the picture for its canny and highly appropriate musical score by Duke Ellington. Rarely has a backround score been employed so deftly.

Therefore, we decided to devote today’s quiz to Stewart’s life and career, asking readers: just how much do you know about Jimmy (if we can be so familiar). Stewart was hardly a remote, forbidding star.  Moviegoers loved his real-guy approach, felt they knew him better than their next-door neighbor.

Our 10 questions will test that notion. (Remember, questions today and answers in tomorrow’s blog.)  Ok, without further ado, on to our Jimmy Stewart Quiz.

1) Question: Stewart was famously past 40 by the time he got around to marrying his one and only wife, Gloria. Their romance had an unusually rocky beginning.  Why? a) She was Jewish while Stewart was Protestant; b) She was immediately turned off by the way he picked his nose in public; c) She had a large police dog who took an instant dislike to the actor; or d) They argued frequently about  politics.

2) Question: Stewart’s onscreen populism is due to the fact that he was raised by a rural, working class family.  a) True; or b) False?

3) Question: The actor loathed the studio system, and felt he was being financially exploited at every turn.  a) True; or b) False?

4) Question:  Vertigo, the 1958 Alfred Hitchcock movie that provided Stewart the vehicle for his finest screen performance, was described by one powerful studio head as “a piece of crap.” Who  is this misguided creature?  a) Louis B. Mayer; 2) Darryl F. Zanuck; c) Harry Cohn; or 4) Jack Warner.

5) Question: Although beloved by many, Stewart was never a top movie box office personality.  a) True; or b) False?

6) Question: Didn’t the normally faithful Stewart admit to an affair with Rear Window costar Grace Kelly?  a) True; or b) False.

8) Question: Stewart won a best actor Oscar for 1940’s The Philadelphia Story, and was nominated for his work in four other titles.  Which one of these did NOT earn the actor an Oscar nomination?  a) The Man Who Shot Liberty Valence; b) Mr. Smith Goes To Washington; c) It’s A Wonderful Life; d) Harvey; or e) Anatomy of a Murder?

9) Question: Stewart’s most enduring holiday film, It’s A Wonderful Life, was an instant box office sensation when it first came out largely because audiences hungered for a challenging Christmas movie.  a) True; or b) False.

10) Question: Stewart was never movie regarded as a movie sex symbol.  a) True; or b) False?