We movie buffs are inundated with lists of best films.

And, we’ve just run across a new one. The British Film Institute of  50 Films to see before the age of 14!

No question in our minds that Chaplin’s best work was in silent pictures. By the early Twenties, the time of The Kid, the master has cemented his screen image of the ‘little man’ who survives against great odds.

As British author/film critic David Thomson put it: As an actor/performer who has impinged on the world’s huddling round the idea of the oppressed little man, Chaplin  may be the most famous image of the twentieth century.

Be that as it may, Chaplin had help in The Kid.  In the title role was a verrry young Jackie Coogan.

Born into a show biz family in 1914, Coogan was introduced to the silent movie world three years later in something called Skinner’s Baby (he was, of course, the baby). Thus began a 55-year screen and tv career that certainly had its ups and downs. (Coogan died in 1984 at age 69.)

The turn with Chaplin in The Kid made his early career fortune. Chaplin as the Tramp finds himself caring for an abandoned child (again, Coogan). The masterful tear-jerker was a hit.  Coogan was thus in line to become perhaps the most famous child actor of that time.

During the Twenties, the roles kept coming and so did the money. The story of Coogan and all that money is fodder for another blog. Enough said that he emerged as one of the more  influential child stars in movie history. 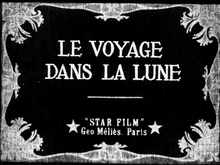 And speaking of history, the above French-made film, released (hold your hat!) in 1902, is perhaps the first big blockbuster in movie history.  Created by Georges Melies, it’s about a group of astronomer’s adventure to the moon.  The production values and, yes, special effects are astonishing, and have influenced filmmakers for decades.

At any age, Le Voyage is worth the journey.