JUST KIDS REVISITED.. With A Quiz

Several weeks ago we ran this snapshot from The Donald Gordon Collection.  But how much do you know about these two from the 1940s?

The guy to the right above (and below) is Rory Calhoun, a good looking dude, was a California-born tough guy, a self professed womanizer and stalwart semi-leading man all in one actor born in L.A. in 1922 as Francis Timothy McCown.

His career began in the mid Forties, and lasted for nearly half a century covering some 125 movie and tv credits. (A reason we are partial to Calhoun is that he was also a pal of our late pal, Donald Gordon, who bequeathed to us his stunning Hollywood photo collection. Calhoun is one of Donald’s subjects.)

The wholesome looking cutie to the left (above) and below is Jane Withers, who was more famously the child star. She was outstanding as that nasty brat — before logging an adult career lasting decades. 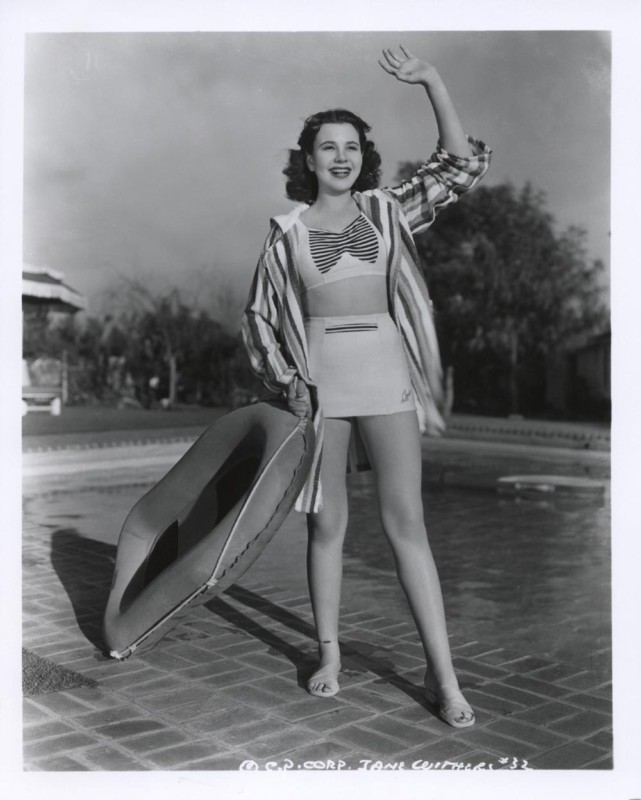 Withers began on radio at age 3,  often featuring impersonations of such big stars of the time.During the 1930’s, she established herself with such titles as Pepper and Angel’s Holiday, finishing the decade with a punch by being named No. 6 on a list of top 10 box office favorites. She was just 11 years old at the time.

1) Question: As a youth Calhoun famously got himself into a pot of trouble with the police.  Which of the following NOT get him into hot water?  a) Stealing a car; b) Robbing jewelry stores; c) Stealing a pistol; or d) Violating the Mann Act.

3) Question:  Calhoun at one point in his career found himself embroiled in the effort to hide the homosexuality of Rock Hudson. How did this happen?

4) Question: — Withers was considered a sort of second banana to Shirley Temple at 20th Century Fox. She is outstanding as that nasty brat (nearly upstaging Temple) in which of the following movies? a) 1940’s Shooting High; b) 1934’s Bright Eyes; c) 1936’s Little Miss Nobody; or d) 1938’s Rascals.

5) Question:  Jane Withers’ general comedic style is based on her impressions of which of these classic movie comedians?  a) Charlie Chaplin; b) W.C. Fields; c) Harold Lloyd; or d) Buster Keaton.

6) Question:  Withers is perhaps best known today for the cleanser tv commercials she made in the 1970’s.  What is the name of the character she played in these commercials?