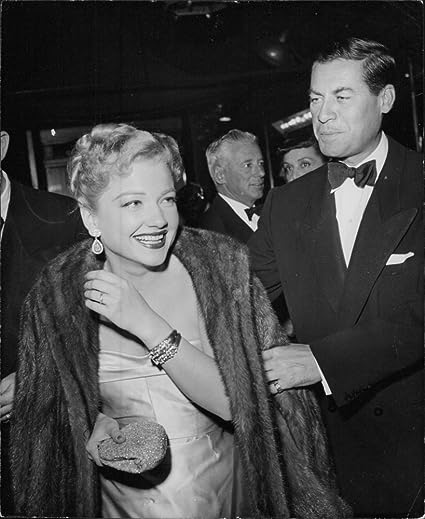 Yup, that’s Anne Baxter, Hodiak’s costar in Sunday Dinner For A Soldier made in 1944, a big year for the actor. His legacy film, Lifeboat, came out then as did Marriage Is A Private Affair, in which he played Lana Turner’s soldier husband.

The Baxter-Hodiak union lasted nearly seven years, and producer a daughter who became an actress in her own right. Baxter went on to marry twice more but Hodiak chose to remain solo. Certainly her screen career outstripped his and lasted longer.

We’ll explain why by answering the questions posed in our John Hodiak Quiz. So, let’s get to them:

1) Question: Hodiak’s Hollywood career, despite his high-marquee position, was by classic Hollywood standards remarkably short, less than 40 movies over 13 years. Why? a) The actor quit to join the Catholic priesthood; b) He much preferred acting on tv and the Broadway stage; c) He was blacklisted for his political views; or d) He dropped dead.

Answer: d) On the morning of Oct. 19, 1955, Hodiak (then just 41 years old) suffered a massive heart attack while shaving in the bathroom at home. The actor did not seem to have a history of heart problems, but did suffer from what was apparently chronic high blood pressure, a condition that kept him out of military service in World War II.

2) Question: Which of the following leading actresses did Hodiak NOT appear with?  a) Gene Tierney; b) Hedy Lamarr; c) Judy Garland; or d) Ann Sheridan.

Answer: d) Ann Sheridan. Hodiak appeared with Tierney in 1945’s A Bell For Adano; with Lamarr in 1950’s A Lady Without Passport; and with Garland in 1946’s The Harvey Girls.

3) Question: Hodiak’s costar in 1944’s Sunday Dinner For A Soldier eventually became his one and only wife.  Who is she? (Hint: She ‘s terrific in The Magnificent Ambersons.)

Answer:  See our introduction above.

4) Question: Hodiak costarred with the following male stars — except for which one of the following? a) Clark Gable; b) Spencer Tracy; c) Walter Pidgeon; or d) Burt Lancaster.

Answer:  Sorry, another of our trick questions.  Hodiak made movies with all of the above.

5) Question: The movie version of The Caine Mutiny Court Martial proved to be perhaps Hodiak’s biggest career disappointment. Why?

Answer: Having won raves for playing Lt. Maryk in the stage version of The Caine Mutiny Court Martial, costarring Henry Fonda, Hodiak looked forward to playing the same role on the big screen version starring Humphrey Bogart as Capt. Queeg. The role, however, went not to Hodiak but to Van Johnson (one of his best performances). Hodiak was, to put it mildly, very disappointed.