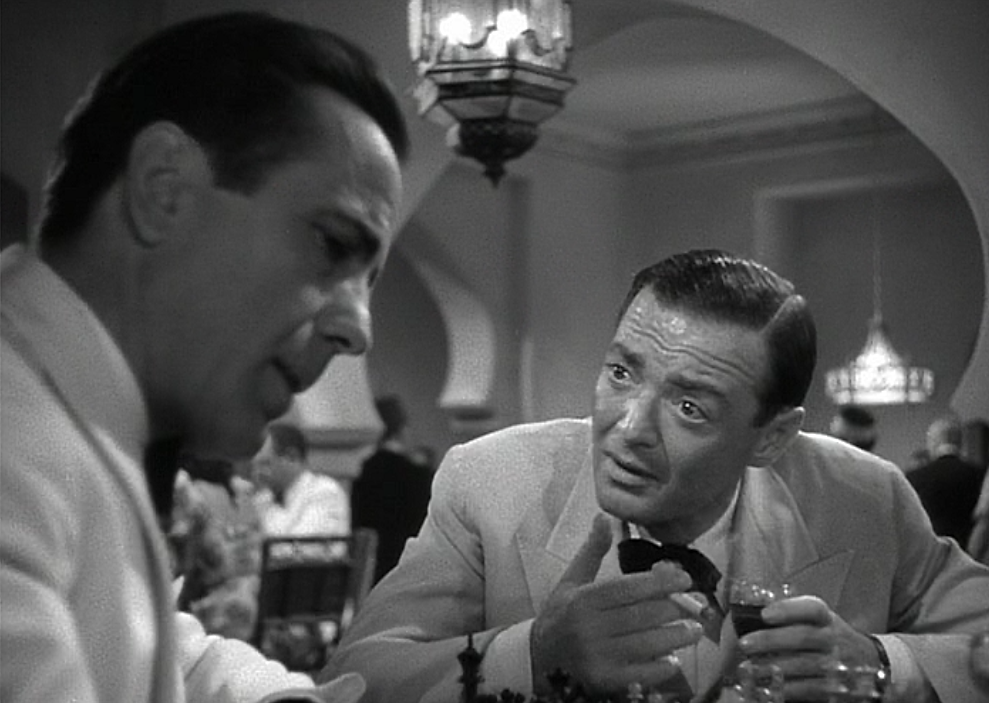 What are the words most often evoked by the characters he played?   Refugee? Spy? Lunatic? Murderer?

Perhaps.  But what about prankster?

We are here today to expose another facet of this marvelous actor — born Lazlo Loewenstein in Hungary in 1904.  That is, that Peter Lorre was an inveterate practical joker.

That may come as as a surprise to those who cherish Lorre’s performances in dozens of unsympathetic roles notably including a child murderer in 1931’s M, as the effete, gun-wielding ‘Joel Cairo’ in 1941’s The Maltese Falcon or as the sleazy killer-thief  ‘Ugarte’ in the 1942 Humphrey Bogart classic, Casablanca.

In honor of Casablanca’s 70th anniversary, we’ll concentrate today on Lorre’s outrageous prank staged at the expense of director Michael Curtiz during the making of that classic.

Off-camera, Lorre was notorious for engendering fun and laughs, often at the expense of key coworkers. Some of his devilish gags were targeted at Sydney Greenstreet during the five-year-period (from 1941 to 1946) in which the actors made eight pictures together including Maltese Falcon and Casablanca.

Besides these two movies, Greenstreet and Lorre appeared together in 1944’s The Mask of Dimitrios, directed by Jean Negulesco and based on an Eric Ambler novel.  The pair also delivered entertaining performances in Negulesco’s 1946 mystery Three Strangers. Greenstreet and Lorre are justifiably regarded today by classic movie fans as one of the screen’s great actor duos. British author-critic David Thomson refers to them as “Lear and the Fool.”

Lorre’s most notorious prank took place one day on the Warner Brothers’ studio set of Casablanca (no, the picture was NOT shot in Morocco!). Director Curtiz, a native of Hungary (nee Mano Kertesz Kaminer), had a reputation as a dedicated womanizer.

Curtiz would hire winsome young extras to accompany him during shooting breaks, with sexual favors as part of the deal. He would choose any private place on the set usually behind some flat in a secluded area. He’d have the grips move a piece of furniture there, a couch, or even a mattress — almost anything to soften his lovemaking, recalled Paul Henreid in his 1984 autobiography.

Lorre got wind of this arrangement, and arranged for the sound department to bug the location of Curtiz’ assignations. Henreid (‘Victor Laszlo’ in the movie) recalled that we were all resting betwen takes one afternoon when suddenly, over the loudspeaker, we hear Mike moaning, ‘Oh God! Oh no,no,no…’

We were stunned.  For a second we thought he was in pain, and we jumped up, but Peter Lorre, grinning like a madman, waved us back, and we realized what was going on. Mike’s moaning became increasingly ecstatic: ‘Oh yes, yes — oh God, yes.’  And then: ‘Take it all, take it all — my balls too!’

The entire cast collapsed in laughter. Fortunately for Curtiz and his status on the set, he never found about Lorre’s trick.