JANE FRAZEE — Who? Queen of the B Musicals

That’s right. They made B musicals as well as B westerns, crime stories and melodrama. And, in the 1940’s many westerns and light musicals featured the woman pictured above — Jane Frazee, the toast of Ramsey, Minnesota who early on carved out a nice niche with older sister Ruth on radio variety shows and in nightclubs. (Jane started out as a professional entertainer at the ripe age of 6.)

When the two sisters arrived in Hollywood in the mid-Thirties, Ruth flunked her screen test while Jane passed with flying colors. Her movie career began in 1936 and continued ablaze throughout the Forties. In all Jane tucked away some 65 credits extending over two decades. Mostly light, gently entertaining stuff.

She was certainly easy on the eyes, pleasant to hear and unobtrusively entertaining. She turned down an offer  from MGM in 1940 because a competing bid from Republic Pictures paid better. While there she worked with none other than Roy Rogers. And, she got star billing three years later in 1944’s She’s A Sweetheart, costarring Larry Parks and a young Nina Foch.

Frazee died from complications of a stroke in 1985.  She was, depending on the source, in her late sixties or 70. 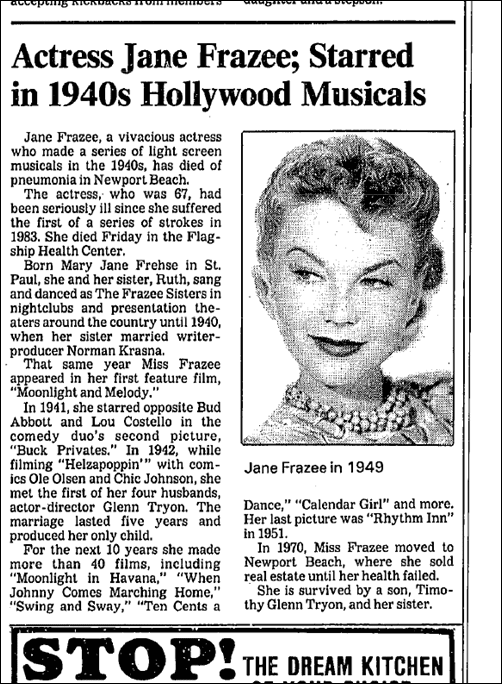