How much did  you know about the superstar who lit up stage, radio, TV, AND the silver screen?

Here (above) he is as the ham Shakespearean actor in a theatrical troupe that finds itself playing Warsaw during the WWII Nazi occupation of Poland. The movie is 1942’s To Be Or Not To Be, a marvelous Ernst Lubitsch black comedy that provides a sparkling performance from Benny and costar Carole Lombard.

The movie was released a month after Lombard was killed in a plane crash, returning from a WWII bond drive in the midwest. Gable never got over her death.

The picture also demonstrates our rule:  any movie with Sig Ruman in the cast is worth seeing. (A young Robert Stack is also on hand as Lombard’s love interest.)

OK, on the answers to our Jack Benny Quiz:

1) Question: Opposite Carole Lombard in the 1942 Lubitsch film pictured above, (considered Benny’s best), he plays:  a) An inept Nazi officer; b) A ham Hamlet in Warsaw under the Nazis; c) Adolph Hitler; or d) all of the above.

Answer:  As indicated above the answer is (b).

Answer:  It was (b) Paramount that declared that Benny was a movie star. But his movies made there was not terribly successful. 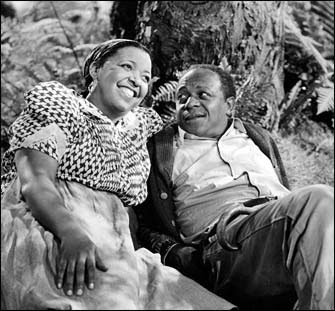 Answer: (c) Eddie Anderson (above right) was Ethel Waters’ costar in Cabin In The Sky.  This appealing actor with the gravelly voice later appeared as a supporting player (as Rochester) on Benny’s tv shows. He was superb in both capacities.

4) Question: Which one of the following did NOT costar in a Jack Benny picture? a) Priscilla Lane; b) Alexis Smith; c) Ann Sothern; or d) Ann Sheridan.

5) Question: What specific thing does Benny have in common with Fanny Brice, Laurel and Hardy, Edgar Bergen and Abbott & Costello? a) All are film comics; b) All were reputed to be major-league cheapskates; c) All were underpaid given their star status; or d) All have had commemorative U.S. postage stamps issued in their honor.