The 1940s was a decade awash in great musicals — Meet Me In St. Louis, Easter Parade, Going My Way, On the Town, Cabin in the Sky, Easter Parade, Take Me Out To The Ballgame, The Good Old Summer Time among them — adorned with established front-line stars such  as Judy Garland, Bing Crosby, Fred Astaire, Gene Kelly, Frank Sinatra and Van Johnson.

Often these pictures were hatched in the MGM studio factory.

What to make, then, of a fluffy tuner from Warner Brothers — the factory that specialized in gritty crime dramas — featuring an untried big band singer, a musically facile professional misanthrope and Jack Carson cast as a romantic leading man?

We’re talking about 1948’s Romance on the High Seas, the anonymously-titled outing that doesn’t take itself seriously for a second. We believe it has been enormously underrated, and deserves better.  Perhaps he’s flipping out but Frank believes it is one of the very best musicals of any decade he’s ever seen.

The top-of-the-title cast is not exactly earth shaking.  This is an early outing of Doris Day’s, a pleasant feature vehicle for the appealing Janis Paige and a “star” vehicle for Don DeFore, most often thought of as a supporting player.

The plot, set largely on a cruise ship making several ports of call in the Caribbean and South America, hinges on a mistaken identity puzzle involving two couples (Paige and Defore, Day and Carson) each suspecting the other is fooling around on the side. Oscar Levant is on hand as a comic foil and, and musical accompanist to Day, as is a superb cast of supporting players (S. Z. Sakall, Fortunio Bonanova, Eric Blore, Franklin Pangborn and Sir Lancelot, among them).

What is especially surprising is Carson’s feat of behaving like a credible leading man, who at the end, gets the young and very attractive Day. (There they are below.)

We know that Carson was big. He was brassy. He could sing, dance and act. Who can forget his amiably sleazy businessman turn as “Wally Fay” — his finest role — in the 1945 version of Mildred Pierce. That classic showcased Carson as a star going toe-to-toe with Joan Crawford.  Savor the movie’s early scenes in which Crawford as Mildred plays on the libidinous designs of Carson to set him up for the murder of her husband.

A mixture of breezy self-regard, delusion, naivete, gullibility and an almost comic sense of danger, Carson is nothing short of delightful. In Romance, he brings amiability, an engaging physical presence and a gentle comic touch to a role that deepens as it develops.

And then there is that other fascinating presence in the movie, of Levant (pictured here with Day). 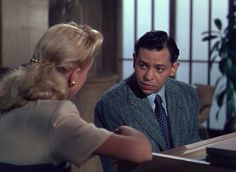 Oscar Levant was unquestionably the most talented musician of any actor to appear onscreen — he played classical concerts throughout his career, and was a pretty good composer to boot. He adored George Gershwin and was the first pianist to record “The Rhapsody In Blue” after the composer himself did , a blatant example of my ingenuous dauntlessness, Levant recalled.

His movie acting appearances — usually sitting at or near a keyboard delivering bon mots and earthy wisecracks — are fairly limited. He made about 15 titles. Most memorable would have to be director Vincente Minnelli’s 1951 MGM musical, An American In Paris, with Levant third-billed after costars Gene Kelly and Leslie Caron, playing ‘Adam Cook,’ an acerbic would-be concert pianist.

As for Day, she was not the first choice for the female lead in Romance.  Betty Hutton was. Doris, considered an untried big band vocalist, was deemed something of a gamble. Boy, did she pay off.  Her singing in Romance’s many musical numbers is impeccable.  Her multiple renditions of the picture’s signature song, Jules Styne and Sammy Cahn’s It’s Magic, is genuinely moving.

See Day in the days when she was a star in the making.

Michael Curtiz directed Romance on the High Seas, supposedly with an assist from Busby Berkeley. The very witty scrips is by the Epstein brothers, Julius and Philip.  S.Z. Sakall plays a key supporting part.

Did anyone mention Casablanca?