May 15, 2018Written by Joe Morella and Frank Segers
Leave a Comment

Wow. She had some career.

What is not generally known is that although Fay Wray was born in the small town of Cardston in the Canadian province of Alberta, she became a naturalized American citizen — voting Republican no less — in 1933. (She is remembered in her hometown by a small fountain situated in a park in her hometown. See below.) 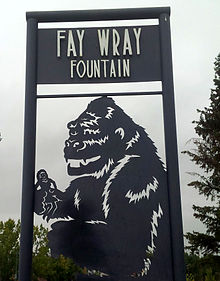 Wray also was somewhat protective of the original King Kong, and her signature role in it.  She was offered a cameo in the 2005 remake directed by Peter Jackson. She even met with actress Naomi Watts, who was cast as Ann Darrow, the part Wray so memorably portrayed.  But, alas, no go as Wray proclaimed the original Kong to be the true King.

Ok, on to the answers to our Fay Wray Quiz.

1) Question: The success of King Kong led to several other Thirties movie roles in which her life or her virtue (or both) were under attack. Which of the following titles did she NOT appear in?  a) Dr. X; b) The Mystery of the Wax Museum; c) The Vampire Bat; or d) The Most Dangerous Game.

1) Answer: Sorry, another of our infernal trick questions.  Wray appeared in all four of these Thirties movies made either just before or after King Kong.

2) Question: Wray was always a knockout onscreen, and drew more than her share of famous lovers offscreen.  Which one of the following was NOT one of her lovers? a) Sinclair Lewis; b) Clifford Odets; c) screenwriter Robert Riskin; or d) Gary Cooper.

2) Answer: d) Gary Cooper. It should be noted that Wray sometimes had dubious taste in men. She was partial to literary lovers for better or worse. Riskin was husband number two remembered for his award-winning screenplays for It Happened One Night, Mr. Deeds Goes To Town and Lost Horizon. Wray at 19 married husband number one, screenwriter John Monk Saunders, a womanizer, alcoholic and drug addict who hung himself after burning through about a million dollars (that’s early 1940’s dollars) the couple had earned through the 11-year duration of their tempestuous union.

3) Question: Fay Wray and actor/director Erich von Stroheim shared something in common?  What was it?  a) A short term sexual affair; b) Both declared bankruptcy at the same time; c) The silent movie classic The Wedding March; or d) Both played roles in Sunset Boulevard.

4) Question: Although she “retired” from movies in 1942, Wray found took a leading role in the in an ABC tv series which ran from 1953 to 1954, and which also starred a very young actress who grew up to be a major movie star.  Can you name the tv series, and who that teenage actress was?

4) Answer:  The tv series was The Pride of the Family, which costarred a 15-year-old Natalie Wood.

5) Question:  Wray’s first of three marriages was a disaster, and resulted in her financial ruin by the early 1940’s.  a) True; or b) False.

5) Answer: As indicated in the answer to question 2, a) True.  Wray’s first marriage to a wastrel left her after 11 years pretty much broke.  She was in her early thirties when the divorce occurred, and had plenty of time to bounce back financially.