How much did you know about the handsome star of Strangers on a Train? 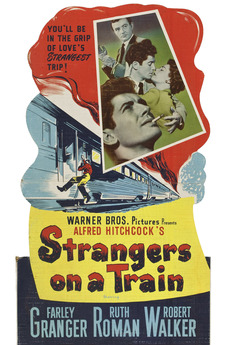 One of the interesting aspects of Farley Granger’s career, which began in the early Forties and continued to 2001, is that he was one of the last leading male studio system actors to mask his personal sexual identity onscreen.

Somewhat like Rock Hudson in this regard, he was considered early on a heart throb, not exactly a “hunk” but as a handsome young man who could act.  In 1954’s Italian-made Senso, for example, Granger turned up playing a dashing 19th century Austrian lieutenant passionately pursued by an Italian countess (Alida Valli).

Our Monday Quiz this week was inspired by his autobiography, Include Me Out, written with Robert Calhoun, his longtime companion, in 2007 — four years before his death at age 85. Here are an answers to our Quiz.

1) Question: Granger be1gan his movie career right after high school by signing an exclusive contract with which one of these producers?  a) Dore Schary; b) David O. Selznick; c) Walter Wanger; or d) Samuel Goldwyn.

Answer:  d) Samuel Goldwyn, who signed up Granger when he was still a teenager. It was the producer’s famous malapropism that served as the title of the actor’s book mentioned above.

2) Question: Which of these Alfred Hitchcock films costarred Granger?  a) Rope; b) The Paradine Case; c) Strangers on a Train; or d) Spellbound.

Answer:  a) Rope and c) Strangers on a Train.  While the former is stagey, far from Alfred Hitchcock‘s best, the latter is a classic and should be seen again and again. The movie also propelled Granger into the ranks of A-list Hollywood actors.

3) Question: Granger got to manhandle actress Alida Valli in Senso, an Italian-made costume drama shot in 1954.  Which one of these famous Italian directors made the movie?  a) Federico Fellini; b) Luchino Visconti; c) Roberto Rossellini; or d) Vittorio De Sica.

Answer:  b) Luchino Visconti, probably best known as the director of the elegant 1963 costume epic The Leopard starring Burt Lancaster.

4) Question: One of Granger’s favorite movies in which he appeared was director Nicholas Ray’s 1948 melodrama, They Live By Night. What was the movie’s original title? a) Thieves Like Us; b) The Young and the Doomed; c) The Twisted Road; or d) Your Red Wagon.

Answer:  a) Thieves Like Us. RKO’s studio boss at the time, Howard Hughes, changed the original title because he thought audiences would think it meant ‘Thieves Like Us,’ wrote Granger.

5) Question:  Which one of the following actresses did Granger NOT romance? a) Shelley Winters; b) Doris Day; c) Ava Gardner or d) Patricia Neal.

6) Question:  Which one of the actresses mentioned above did Granger very publicly become engaged to?

7) Question: Granger had an opinion about why Bette Grable smiled so much in her 20th Century Fox musicals.  What was it?  a) She was paid extra for appearing in musicals; b) Grable fell in love with Granger; c) She wore feathers or sequins, which she enjoyed; or d) She arranged to have a veteran chorus boy situated behind her to whisper dirty jokes in her ear.

Answer: d) Granger wrote that Betty Grable may have been (20th Century Fox’s) biggest star, but she came equipped with the soul of a chorus girl who relished a good dirty joke. Thus she demanded that Freddy Ney, an outrageously funny chorus boy from New York, was always directly behind her in big musical numbers. His filthy, stage-whispered running commentary kept a big smile on her face at all times.

8) Question: Granger never won an Academy Award but he did win an Emmy.  What was it for?

Answer: In 1977, Granger won an Emmy as outstanding actor in a daytime tv series, One Life To Live.

9) Question:  Like quite a few in Hollywood at the time, Granger had serious personal reservations about Danny Kaye, his costar in 1952’s Hans Christian Andersen.  What was the problem?  a) Kaye was generally catty and sarcastic; b) Kay would criticize the English spoken by French costar Zizi Jeanmaire; c) He stole a singing part from Granger; or d) Made a nasty crack about Granger’s costume.

Answer:  Actually all four choices are correct.  Danny Kay infuriated Granger on all counts, particularly his criticism of costar Zizi Jeanmaire.  Let’s put it this way: Kaye was not beloved on a personal level by many of his Hollywood contemporaries.

10) Question: Granger once made a spaghetti western in Italy.  a) True; or b) False?

Answer:  a) True.  The picture was 1970’s They Call Me Trinity, part of the Terence Hill-Bud Spencer ‘Trinity” comedy western series. Granger described it as a comic book of a movie, one of the highest grossing films ever made in Italy. He loved Italy and often found excuses to work there.