There he is (below) with Humphrey Bogart.

As the big gesture might indicate, our man Edmond O’Brien plays an outsized PR man involved with not-terribly-successful writer-director (Bogie) who convinces Flamenco dancer Ava Gardner to try her hand in the movies. As he did in many of his roles, O’Brien seems to sweat in the part.

The picture was Joseph L. Mankiewicz’s 1954 classic, The Barefoot Contessa.  His performance won O’Brien a best-supporting-actor Oscar.  He also copped a Golden Globe for his role. 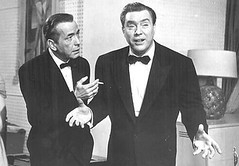 And then there was Shakespeare.  O’Brien early on caught the attention of Hollywood scouts thanks to his high quality stage work including an appearance as a gravedigger in a John Gielgud production of Hamlet. In Hollywood, in 1953, O’Brien played the role of Casca in director Mankiewicz’s screen rendition of Julius Caesar.

Ok, on the answers to our Edmond O’Brien Quiz:

1) Question: Although he worked in all manner of commercial studio films, O’Brien’s first professional preference was Shakespearean drama.  a) True; b) False.

Answer: We’d have to say b) false on this one since O’Brien was a highly versatile actor who relished any number of good roles. He just preferred challenging work.

2) Question: A heart attack cost O’Brien a key role in which Academy Award winner?  (Hint: he was replaced by Arthur Kennedy).  a) The Bridge on the River Kwai; b) Around the World in 80 Days; c) Lawrence of Arabia; or d) A Man For All Seasons.

Answer: c) 1962’s Lawrence of Arabia. The part, played by Kennedy, is that of an American newspaperman pursing the big story about Lawrence (played by Peter O’Toole). Kennedy is good but we wonder how the more animated O’Brien would have handled the part.

3) Question: Which of the following titles was responsible for O’Brien’s best supporting actor Oscar win? a) Seven Days in May; b) The Barefoot Contessa; c) The Wild Bunch; or d) The other Side of the Wind.

Answer:  As mentioned above, the answer is (b).

4) Question: Two of O’Brien’s best movies, The Hitchhiker (see below) 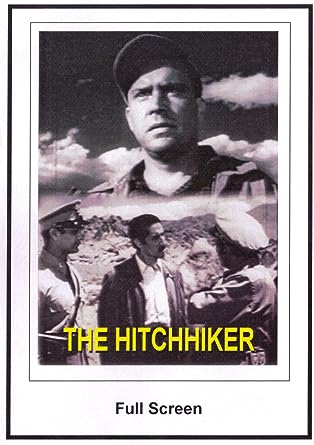 and The Bigamist are often remarked on today because: a) Both pictures were self-financed by O’Brien; b) Both pictures cast black and Hispanic actors in key roles; c) Both films were directed by a woman, rare at the time; or d) None of the above.

Answer: c) Both films were directed by actress Ida Lupino, who also plays a key role in The Bigamist. In that one, O’Brien attempts to juggle two marriages at the same time. 1953’s The Hitchhiker may be Lupino’s masterpiece as a director (she’s  not in it). It’s a truly suspenseful crime drama with a superb bast (O’Brien costars with Frank Lovejoy and William Talman). In any case, woman were rarely seen behind the camera.

5) Question: Late in his career (he died in 1985 at the age of 69) O’brien took on one of his most distinctive and memorable character roles in a classic western. Can you name the film’s title and its director?

Answer: 1969’s The Wild Bunch, directed by Sam Peckinpah.  O’Brien has a small but incisive role that prompted New York Times critic Vincent Canby to write: Mr. O’Brien is a special shock, looking like an evil Gabby Hayes, a foul-mouthed, cackling old man who is the only member of the Wild Bunch to survive.