How much did you know about the star whose career ended much too early?

Jeff Chandler was never anyone’s idea of a powerful acting presence onscreen.  The guy was, however, easy to look at and listen to (he had a most ingratiating vocal delivery). And for a star, he was considered a genuinely good guy offscreen.

Here he is with Universal’s other star of the period, Lex Barker.

It may come as something of a surprise to learn that Chandler was, in fact, an Oscar-nominated actor. It was early in his screen career when the big guy portrayed Indian chief Cochise in the 1950 Delmer Daves western, Broken Arrow, starring James Stewart. Chandler’s  performance won him a best supporting actor nod, the first actor to be nominated for portraying an American Indian. (Not bad for a guy born Ira Grossel in Brooklyn.) 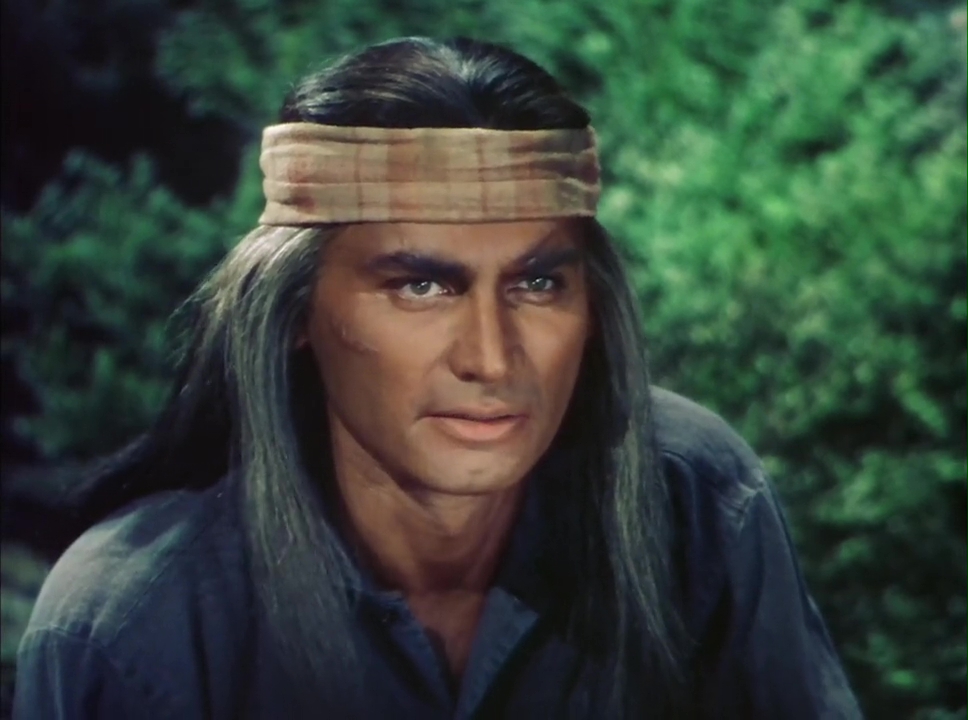 Ok, on to the answers to our Jeff Chandler Quiz:

1) Question: Before his screen career took off, Chandler played the principal male character on one of America’s most popular radio series.  Which one of the following?  a) Our Miss Brooks; b) Amos and Andy; c) The Green Hornet; or d) Life with Luigi.

Answer: a) Our Miss Brooks debuted on radio in July 1948, and became a huge hit. It brought Chandler to the attention of Universal execs, and made a star of Eve Arden, who played a saucy high school teacher with romantic interest in a clueless biology teacher played by Chandler.

2) Question:  Chandler was married and divorced just once, but had a blazing affair with Esther Williams, a liaison that seemed destined for marriage.  Why didn’t it? a) Williams caught him in bed with another woman; b) Williams tired of his gambling proclivities; c) Williams discovered Chandler one day dressed in drag; or d) Chandler couldn’t swim.

Answer:  c).Chandler was Esther’s costar in 1958’s Raw Wind in Eden and later her lover. One afternoon, she walked into a bedroom and discovered a new aspect to Chandler, the result of which  was forthrightly recounted in Esther’s book, The Million Dollar Mermaid, her excellent 1999 autobiography coauthored by Digby Diehl.

Wrote Esther:  I froze at the bedroom door and started screaming. I couldn’t stop myself…I just stood there in the center of the doorway and screamed. What was all the fuss about? Well, Esther had just stumbled into the realization that her lover was a crossdresser.

He was standing in the middle of the bedroom in a red wig, a flowered chiffon dress, expensive high-heeled shoes and lots of makeup. (Since Chandler stood 6-feet-4 inches, it must have been quite a sight.) ‘Take that off! Take that off now!’ I yelled. (Chandler’s death from in a botched back operation in June of 1961, sent Esther grieving about for that good lovable man who almost had been my husband.)

3) Question: Although Maureen O’Hara found Chandler to be a wooden actor (Acting with him was like acting with a broomstick, she said), he was once nominated for a best supporting actor Oscar.  For which movie? a) Sword in the Desert; b) Smuggler’s Island; c) Bird of Paradise; or d) Broken Arrow.

4) Question: Chandler once said his favorite film was 1952’s romantic thriller Because of You in which he supported a sexier than usual Loretta Young. Despite his enthusiasm, Young later gave Chandler faint praise as her costar.  a) True; or b) False.

Answer:  a) True.  But she did no gently. Said Young: (Chandler) was more of a personality than an actor…a charming man.

5) Question: Throughout his career, Chandler displayed real musical talent that convinced some that he was a better musician than actor. a) True: or b) False.

Answer:  a) True. Chandler had something of a career for himself as a musician, a composer and singer and even a violinist.