BARDOT — A Phenomenon in Her Day

She hit the screen in a big way.

When the former Camille Javal exploded onto cinema screens in the 1950s, she put SEX squarely on the movie map.

Around 1957, Frank was a teenager trapped in a less-than-exciting summer job as a “dryer” in an assembly-line car wash in Yonkers, New York. One day, when he actually dozed off while spiffying up some headlights, management gently suggested he take the afternoon off.

Instead, Frank headed for the nearby Strand Theater, which was playing a matinee of Et Dieu crea la femme or, as the theater marquee put it, And God Created Woman. Going in Frank knew little about French films and zilch about the movie’s star, Brigitte Bardot (born in Paris in 1934).

A couple of hours later, he emerged a changed youth. 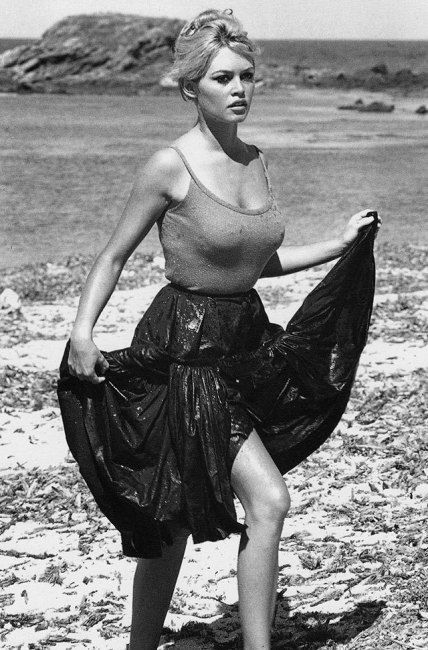 Keep in mind this is the late Fifties when Hollywood, still bound by the Production Code, gushed with Rock Hudson-Doris Day romances, separate sleeping arrangements for married couples and “darns” instead of “damns.” European filmmakers were not bound by such strictures, and consequently allowed (relatively speaking) the eroticism fly. The highest flyer of the period was — Brigitte Bardot.

She daringly displayed most parts of herself, often lying on her belly on a picturesque beach, legs dangling playfully in the water. As a former dance enthusiast and model, Bardot had the goods to carry this off in memorable style.  Among her first movies was 1952’s Manina…La Fille Sans Voile (The Girl in the Bikini) in which an 18-year-old Bardot — already getting top billing — plays a light keeper’s beautiful daughter.

The image stuck of, as critic David Thomson put it, the epitome of the youthful sexuality that tanned itself on the Cote d’Azur. In short order, Bardot married director Vadim, the first of her four husbands, who spectacularly capitalized on this image in And God Created Woman in 1956. With one exception, it remains Bardot’s signature film.

Her short movie legacy — just 44 credits in all — probably rests on her unforgettable performance in Jean-Luc Godard’s Le Mepris (Contempt), the lush (in Cinemascope, no less) 1963 tale of a frustrated screenwriter and his young, all-too-restless wife. The movie’s opening shows Bardot reclining langorously — fully nude. She looks formidable. 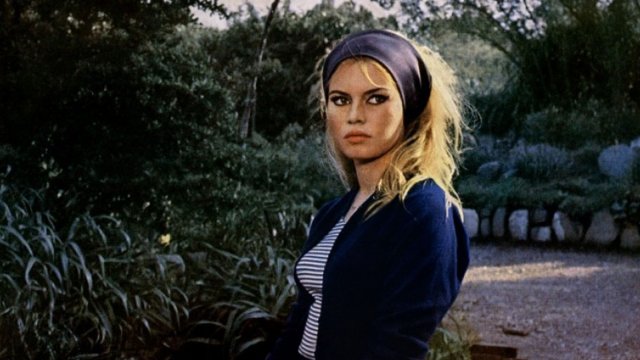 Bardot never bothered with Hollywood all that much — she appears in a supporting role in 1953’s Act of Love, starring Kirk Douglas — and retired altogether from moviemaking by the time she turned 40. In recent years she has devoted much of her time to her work as a celebrated animal rights advocate. She is still known in France simply as “BB.”

As the promotional one-sheet  for her most famous film has it — ‘And God Created Woman’…but the devil invented Brigitte Bardot.