May 10, 2019Written by Joe Morella and Frank Segers
2 Comments

It seems to us that if any Hollywood actresses have a claim on eternal public life, they would have to include (in no special order) Marilyn Monroe, Elizabeth Taylor and Audrey Hepburn.

Of the three luminaries mentioned above, Hepburn is now the closest to Hollywood sainthood. Her fashion model chic — termed her “iconic style” — has a posthumous appeal of its own, so it’s no surprise that her image adorns magazines and posters to this day.

Although she’s been dead for more than 25 years now, her visual appeal remains refreshingly contemporary.  Publication not too long ago of a coffee-table book, Audrey In Rome coauthored by her son Luca Dotti, makes the case.

The book is loaded with rarely seen period photos taken during the actress’ 17-year residence in Rome dating from 1969, after the bulk of her movie career was over.

Hepburn looks great and is — even while walking the dog — dressed in high-fashion impeccability. Yet, we ask, just how much do we know about her early life, especially during her war-torn years when the Germans invaded Holland in 1940. (That’s an early shot of Audrey below.)

For obvious reasons the early to mid-Forties were tough years for the young Hepburn and her family. Her mother, designated a “Baroness,” came from impoverished Dutch nobility.  Her father, the Baroness’ second husband, a self-regarding Englishman who claimed family ties to Mary Queen of Scots, walked out on his family when his daughter was just six years old.

Audrey was born in 1929 in Belgium, spent part of her childhood in England and moved to Holland in 1939, just in time for the Nazi invasion.

For the next five years, Audrey pretty much lived hand to mouth and fought to achieve basic survival. It was a time of trauma for her, to say the least. And she never relished a full recounting of what transpired during those years, and how difficult they were.

A interesting new biography, Dutch Girl by Robert Matzen (GoodKnight, 373 pages), fills the information gap. As Mr. Matzen demonstrates in his fascinating book, according to The Wall Street Journal review, Audrey Hepburn, for all her future fame, was defined and haunted by World War II.

It was a period that the actress seldom discussed in detail and which has been glossed over or sensationalized by frustrated biographers. But Hepburn’s reticence was not simply an unwillingness to recall the war’s hardships and horrors.

It also reflected the uncomfortable fact that her parents were openly pro-Nazi.

Her pushy stage-mom mother wrote pro-German newspaper articles, and even obtained a personal audience with the Fuhrer. Audrey’s father worked so avidly for Nazi interests that he set off alarm bells in British intelligence. As a pre-teenager, Audrey took up ballet and dance, which she loved. Her first public performance, on July 18, 1941, was before an audience of German soldiers.

But, she did all she could as a budding 13-year-old to counter the hated occupiers, reports Matzen. Audrey danced in secret shows that helped raise funds and boost morale, and assisted a doctor who coordinated local resistance activities.

Besides tending to the sick and injured, Audrey brought food to downed Allied air crews  and distributed a banned underground newspaper.  She celebrated the freedom that came in April 1945 with her first cigarette, then gorged on chocolate bars until she was sick. 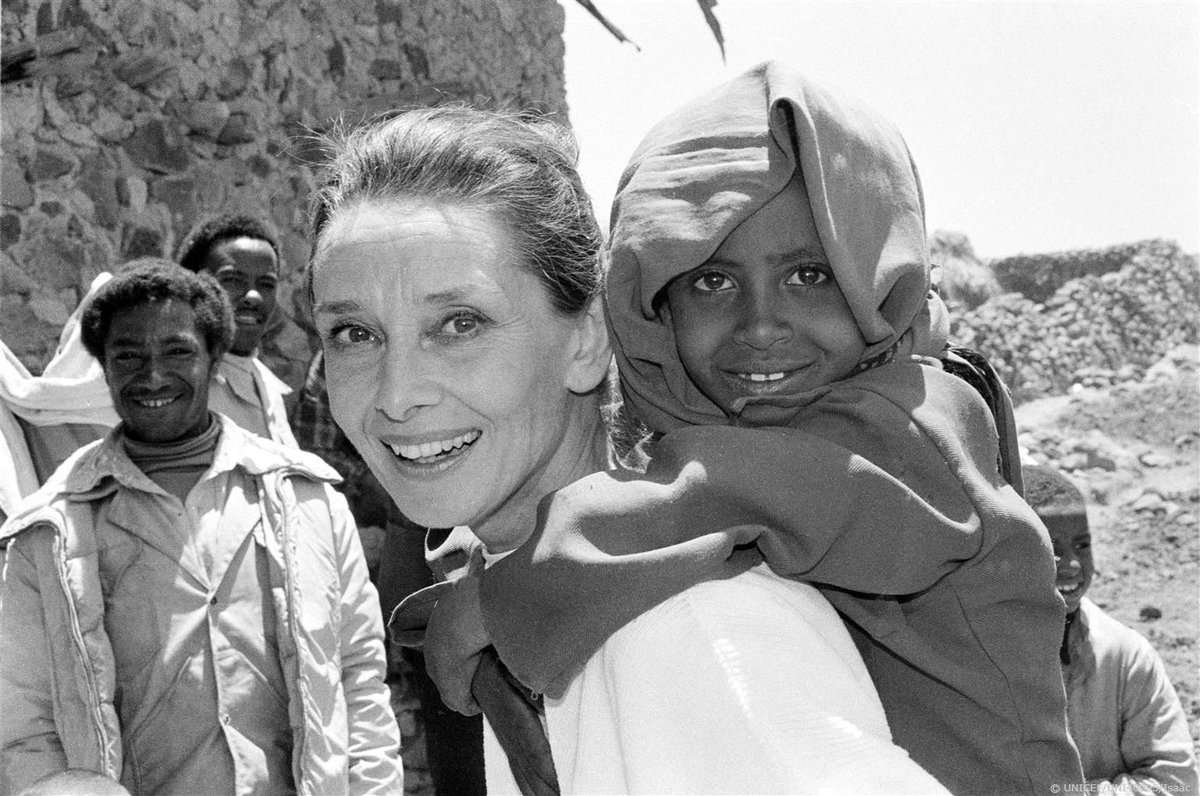 In the actress’ final years, she became a prominent goodwill ambassador for UNICEF, visiting Africa, South America and Asia on behalf of young victims of conflict. Her work in this regard won her a Presidential Medal of Freedom months before her death of abdominal cancer in 1993, at the age of 63.