ANOTHER OF OUR ORIGINAL PHOTOS

Here’s another snapshot from our Donald Gordon Collection. Though the print’s a bit faded, it’s easy to recognize the two stars with Donald (who is on the right).

At the time this shot was taken they were one of Hollywood’s happiest couples. (They were married from 1934 until 1955.)

Langford, who died in 2005 at the age of 92, is best remembered as the comely songstress who accompanied Bob Hope on countless USO tours during World War II. Entertaining the troops was, she said, “the greatest thing in my life.” 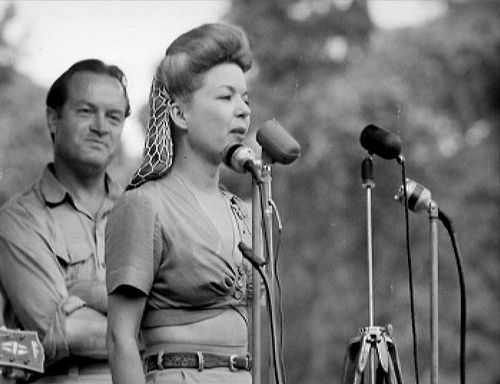 Her movie career of some 30 titles, largely in the Thirties and Forties, featured her in mostly mediocre musicals. A radio stint opposite Don Ameche as “The Bickersons” — a battling married couple — was a popular hit.

Husband Hall had a far more extensive screen career, and, although the couple divorced in 1955, she and he remained close friends until his death.  Having been diagnosed with bladder cancer, Hall committed suicide in 1979, at the age of 64.

From 1937 to the mid Forties Hall was one of the brightest stars in Hollywood. There he is  pictured above with Dorothy Lamour. (They are the sexy costars of director John Ford’s 1937 extravaganza for producer Sam Goldwyn, The Hurricane.)

Hall seemed to specialize in acting with his shirt off. At one point, Universal considered him for the role of Flash Gordon, which went to ex-swimmer Buster Crabbe.

California-born in 1915 (in Fresno), Hall was the son of Swiss-born actor Felix Locher and his Tahitian princess wife. He started his career in 1935 under his actual name of Charles Locher.

He also was the nephew of James Norman Hall, who wrote the book which became The Hurricane’s source material. (Hall also wrote the novel, Mutiny on the Bounty.) And, the actor was cinematographer Conrad Hall’s cousin.

Jon Hall had a glowing youthful handsomeness — he reminds Frank of an early Tab Hunter.

He wore his wholesome good looks especially well in the six movies he made opposite Maria Montez, the Queen of several Universal’s splashy Technicolor fasties set in exotic locals and prominently placing the so-called “Carribean Cyclone” (Montez hailed from the Dominican Republic) in various state of dishabille.

Towards the end of his life, Hall reportedly said that he never really liked acting.  “It’s a bore,” he declared.

Nonetheless, Hall had a fairly long career — nearly 50 movie and tv credits over a 30-year span — and made an impression on television after his big-screen career cratered. Some may remember him as the creator and star of the Ramar of the Jungle tube series, which ran from 1952 to 1954.  But we aren’t counting on it.