A Really BIG Star on Stage and Screen

Rex Harrison won a Tony in 1957 and later, in 1964, an Oscar for playing Henry Higgins in My Fair Lady. Ok, you knew that already.

Here are some things you may not know about this major stage and Hollywood star:

— He was born Reginald Harrison in England in 1908.  He later said he changed his first name because Rex is the Latin word for king.

— He started his career in British regional theater, blowing his first one-line part at the Liverpool rep.  He survived, obviously. His first movie, in 1930, a sports comedy titled The Great Game, was filmed in England. His Hollywood days were spent largely at 20th Century Fox.

— He actually won THREE Tony awards.  The first in 1949 for his performance in the drama Anne of a Thousand Days; the second for My Fair Lady; and the third in 1969 designated as a “special Tony Award.”

— He loathed the nickname, “sexy Rexy,” applied to him by the press.

— He played the role of King Mongkut opposite Irene Dunne in 20th Century Fox’ 1946 drama, Anna and the King of Siam. This, of course, evolved thanks to Richard Rodgers and Oscar Hammerstein into the classic The King and I — starring Yul Brynner.

— He was nominated in the best actor category for his performance in one of the most profligate productions (and perhaps the biggest box office bomb) in movie history — 20th Century Fox’s 1963 mega-extravaganza Cleopatra with Elizabeth Taylor.

And now a word about Carole Landis (pictured below).

Wisconsin-born Landis, who broke in with bit parts at Warner Brothers, emerged a 20th Century Fox contract starlet in the 1940’s plagued by a disastrous married life (involving four husbands) and a sputtering career. Along the way she had had many well known affairs including flings with Busby Berkeley and Darryl Zanuck.

In mid decade she started an affair with Harrison — at the time he was married to actress Lilli Palmer (a marriage he refused to end).  In July of 1948, Harrison walked into Landis’ home in the Pacific Palisades, and discovered her dead body.

His lover had overdosed on sleeping pills. She was 29 when she killed herself.  Her suicide note asked her mother to “pray for me.” Supposedly, when a maid discovered her body on the bathroom floor, she waited several hours before calling a doctor and the police.

Rumors soon circulated that Landis had left two suicide notes, one for her mother and one for Harrison. But supposedly the actor’s (or the studio’s) lawyers told him to destroy it.

And speaking of Harrison’s second wife, Lilli Palmer (pictured below), she was born in 1914 in Prussia, the daughter of a proper German family — father a doctor, mother an actress — who took to acting early on. She worked in stock and in cabarets until the early Thirties when she was lured to England at the behest of producer Alexander Korda. That liaison didn’t work out especially well but Palmer managed to make her movie debut in 1935’s Crime Unlimited. 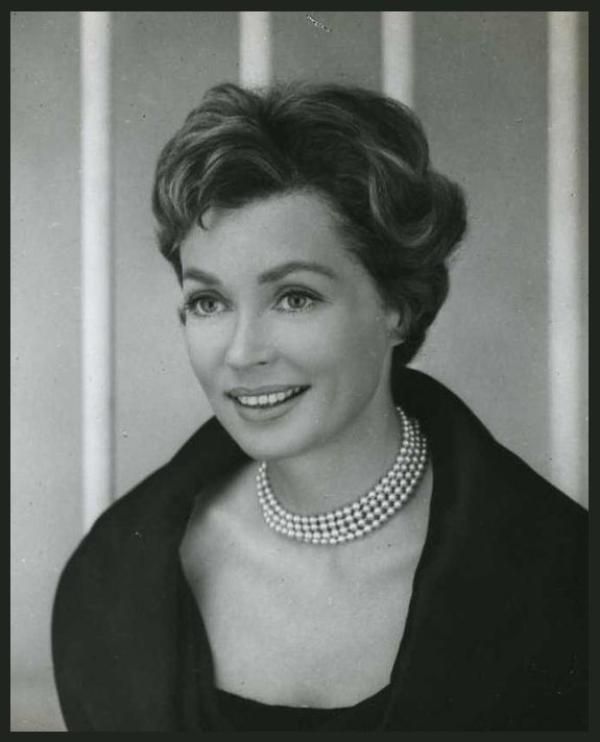 After well-received appearances in a series of titles over the late Thirties and into the World War II years — including Alfred Hitchcock’s 1936 thriller The Secret Agent and Carol Reed’s A Girl Must Live in 1939 — Palmer established herself as a European star. Her appearance with husband Harrison in 1945’s The Rake’s Progress sealed the deal.

When Harrison decamped from England to Hollywood, Palmer joined him, remaking herself into a physically striking leading lady of considerable glamour. As British critic David Thomson noted, In Britain, she had looked pretty but ‘European.’ In Hollywood she was turned into a beautiful woman.

While starring in a string of successful titles — including 1946’s Cloak and Dagger from director Fritz Lang and Robert Rossen’s 1947 melodrama Body and Soul opposite John Garfield — Palmer undertook Broadway stage appearances with her husband in Bell, Book and Candle, and then in the film adaptation of the stage hit, The Four Poster.

Harrison divorced Palmer in 1957, and subsequently married four times, notably in succession to actresses Kay Kendall and Rachel Roberts.  He died in New York in 1990, at age 82, of pancreatic cancer.