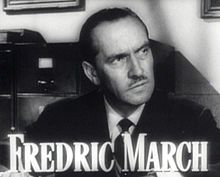 Great stars of both screen and stage. and… They never starred together but they share a unique trait. Both won TWO Oscars and TWO Tony Awards. And they are the only two actors (so far) who’ve accomplished that feat. March won best actor Oscar for….. 1931’s Dr. Jekyll and Mr. Hyde and for…. 1946’s The […]