EDMUND PURDOM — He Came… And Went. Our 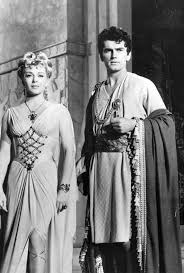 In the early 1950s everyone who went to the movies knew about Edmund Purdom. Here he is looking stern in the 1955 MGM Biblical epic, The Prodigal, with Lana Turner.  Hollywood considered Purdom perfect for the big and brassy extravaganzas it was churning out.  He was blandly handsome, had Shakespeare on his resume, was well […]